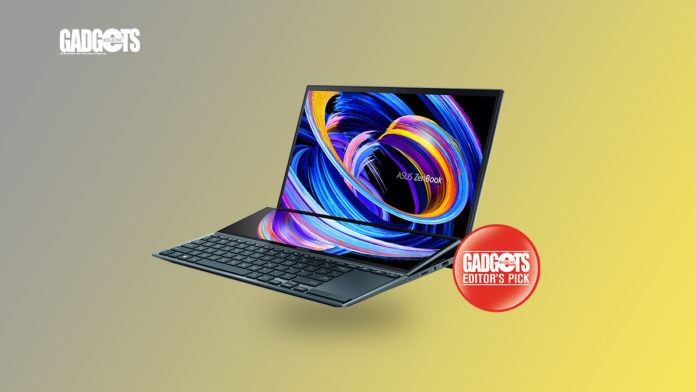 With a few notable exceptions, laptops have basically remained the same as far back as I can remember. Enter the ZenBook Duo 14. This laptop is a new take on the laptop as a creator’s tool, and we got to take it for a spin.

I have always been a fan of Asus’ minimalist take on laptop design. It’s nicely understated, with no unnecessary flashy logos, bells, or whistles. The lid is done in the brand’s usual understated circular pattern, so if the shiny Asus logo doesn’t give it away, the way the light comes off it does.

Opening the lid does a few things. First, it lifts the laptop’s base off the surface, giving it nice table clearance, and putting the keyboard at a more comfortable angle for typing on the nicely backlit, low-profile keyboard. Secondly, it angles the second screen perfectly to face the user and be accessible via finger, stylus, or your vision.

Did we not mention the second screen yet? Right. The Asus ZenBook Duo 14 has a second screen. More on that in a bit.

The second screen, which rests just above the keyboard area, is called the ScreenPad Plus and is 12.65 inches on the diagonal, with a resolution of 1920 x 515 pixels, and likewise has stylus support for the included Asus Pen. Ports are reasonably abundant, with a full-size HDMI port, 2 Thunderbolt 4 ports for power and display, and a USB 3.2 port, along with the combo audio jack.

Over the course of the pandemic, I’ve picked up a few things, not the least of which are toying with video editing and creating a podcast. While I usually use my gaming laptop for that purpose (coincidentally also an Asus), I have frequently wished I had more screen real estate, particularly when working on our four-host podcast. You can imagine my glee when I cracked the ZenBook Duo open to find a whole other screen below the main screen.

The first thing I did after getting my credentials in was download and fire up Audacity and immediately get to work on a podcast episode.

Even non-creative work was made better by the second screen. Chats, emails, reference pages, and even cat videos remain visible and usable without taking up precious main screen space. I have no idea how I will ever use a regular laptop again.

It’s as great as one might imagine. The screen really is more than just a gimmick. An entire host track fits nicely in the space, allowing me to comfortably watch all the hosts’ audio without having to squint to hunch over the laptop. The beefy i7 processor made short work of effects such as noise cancellation, normalizing, and rendering, all of which were completed noticeably faster than on my older i7 laptop or i5 desktop. The included stylus was also quite useful, though, for my applications, it was less so than if I were a graphic artist or more heavily into video.

There are software enhancements the brand included to make life even better. Controls for some programs, including Adobe video editing software, make the lives of editors that much better, and even simple add-ons such as display controls and convenience features such as being able to flick a window from the top screen to the bottom one and vice-versa makes the screen a genuinely handy addition.

While we’re on the subject of speakers, the Harman/Kardon ones on this device are great, but there is a lot of distortion when the volume is maxed out. Somewhere around 80 percent appears to be the maximum you’re going to want to set the volume to keep from audio sounding blown out.

The battery life on the ZenBook Duo 14 was excellent. Under normal working conditions, it lasted a full 8-hour workday without having to plug into a wall outlet. Granted, there wasn’t any heavy lifting involved, and it was mostly Google Docs, youtube, and some browser windows, but that’s still quite impressive. And since the included power adaptor isn’t really that heavy, you can just toss that in with the rest of your gear if you know, you’ll be needing extra power.

While it’s not the main purpose of this particular device, I was able to get some gaming in as well, though it was just Overwatch. It manages a steady 50FPS on recommended settings, which was more than enough for me considering it’s such a thin, light laptop with a second screen. Did I mention it has a second screen?

The value score of this needs some explaining. For a regular user, the PHP 89K price tag is clearly quite high and gets a 3. However, the additional functionality delivered by the ScreenPad Plus is a godsend if you’re a creative, and even more so if you’re a creative on the move, so that nets it a 5. Let’s just split the difference and give it a solid 4. If you need the features, definitely give this a good look.

Creators rejoice! This is a great laptop for making content on the move, or at your actual desk.