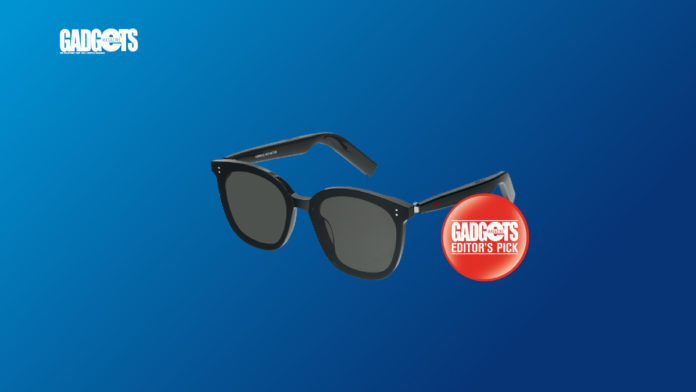 While the concept is not new in the least, combining audio hardware with glasses hasn’t really taken off. There have always been problems—either it’s too cumbersome, too weird-looking, not effective enough, or some other issue that makes it more a novelty than a real innovation. Huawei is looking to change that with the Huawei Gentle Monster Eyewear II. There is some pretty impressive innovation here that takes the concept to the next level. Is it enough of a change to make it a real, daily-wear thing? Let’s find out.

There are a few designs offered for this line, with two pairs of chunky but fashionable sunglasses, a pair of semi-round glasses, and half-rimmed glasses. To anyone just looking at them, they’re practically indistinguishable from regular, run-of-the-mill eyewear—they’re actually extremely low-key, which is the first great thing about them. They’re also fairly basic in their design, and have a broad, if not universal wearability to them. What we got were the MYMA sunglasses, which are large, tinted, and have a very ubiquitous shape. Think Wayfarers, make the lenses larger and more rounded at the bottom, and that’s them. This is the first innovation, if you can call it that: these are made to be as subtle as possible, and it actually works.

The only difference you might find is in the stems. They’re curiously thicker than average. They aren’t so thick as to be particularly obtrusive, but they are noticeably thick. This is where the innovation lies.

There are specialized drivers built into each of the stems, just about where one’s ears would be. The speakers communicate with your device via Bluetooth 5.2, and are powered by an 85mAh battery, which is charged wirelessly with the case. Crucially, there are no wires to plug into the glasses, nor are there any ports anywhere on the device to ruin the look. There are also two microphones hidden inside, to receive voice commands, and hear the user speak, and sensors to accept swipes and pinches to access different functions. The whole thing is IP54 rated, so it can handle splashes, and some dust, adding to user convenience. All of that in a pair of nondescript glasses. Impressive.

I have to be honest. Having been in this business for a long time, I’ve had to review my share of gimmicky products, so I viewed these glasses with much skepticism. I mean, this has been done, and it never really took off. This all changed when I paired the device, and got to playing music.

I find it difficult to put to words how shocked I was when the sound came through. While it doesn’t give you audiophile-quality music output, but it blows inexpensive or “kit” headphones out of the water. There’s a little loss of clarity in the mids, but the lows are surprisingly present, and the highs, which one would expect to be missing are clear as well, though you have to turn it up a bit. Listening to Cello Suite No. 1 in G Major (a test track of mine—I’m not trying to be pretentious by choice), the sweet sound of the cello came out beautifully, with impressive presence. Vocals, particularly in Lana Del Rey’s Video Games were clear and discernible. There was no distortion when the music swelled, and the subtle harp sounds came through beautifully. James Blake’s cover of Limit to your Love, started a little thin on the higher vocals and piano, but acceptably so. The very low bass at the start was, however, almost totally absent. Other tracks verified that higher highs and lower lows are just outside of what the speakers are capable of driving, but mids are solid, making vocals pleasant enough to hear, if a little on the tin side. Bass guitars and bass drums come across decently, but sounds on the lower register of EDM music are more a whisper than a thump.

Overall though, the performance is impressive. If the design of the glasses suited me better (and if I looked a LOT more like RDJ), I can imagine this is what Tony Stark hears with his eyewear. There’s also some clever design here, minimizing sound leakage—of particular importance when it comes to calls. Other people can hear what you hear, but they’d have to be considerably in your personal space, sand you’d probably notice that. While I was listening to music, my wife, sitting across the counter from me, couldn’t hear what I was listening to, making office use perfectly acceptable in my book.

Controls take some learning, and are some combination of taps and swipes to control playback, volume, and your phone’s assistant. As with many touch devices, it takes some learning, but gets to be second nature in time. This is helped along by the device’s responsiveness, hardly ever responding wrong to my input.

Battery life is rated at 5 hours per charge, and I found this to be mostly accurate, as total time between charging was a little more than 4 hours of music playback at about 60 percent volume. Something to note is that at full volume, it’s not ear-splittingly loud, but it won’t really drown outside sounds. Also impressive is that there’s no noticeable delay when watching video, even on YouTube. This is a big deal, and something I really love.

One other niggle I have with it is that the unusually large charging case doesn’t have an internal battery, so if you want to charge your glasses, you’ll need to have the charging case plugged into a power bank or wall charger.

The local SRP for this device is PHP 21,999, This is admittedly quite expensive. Is it worth the cost? It’s admittedly a bit of a hard sell on paper, but that price tag is a lot easier to accept once you give it a try. Is it for everyone? I can’t say it is, but I can totally see myself rocking a pair of these with my daily prescription lenses and being more than happy with it. That startlingly good sound quality, even though it’s not perfect, really is something, and really, the idea of being able to just play music and take calls without any additional earbuds is tantalizingly sweet.

If you find a pair that suits your style, I don’t think you’ll regret it

A Fitbit gift guide for the holiday season

If you want your loved ones to keep healthy, check out the Fitbit gift guide below, and find great deals that match your budget. For...
Read more