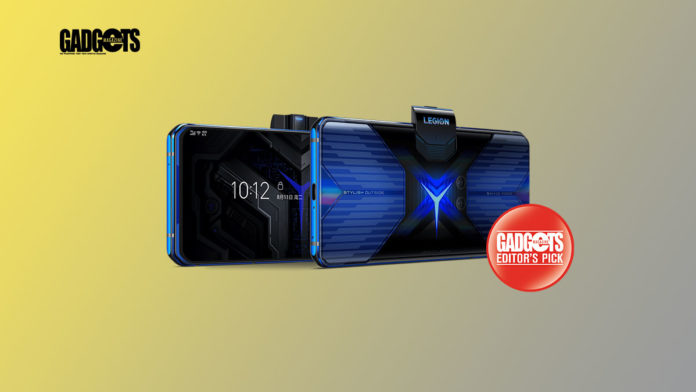 Does the Lenovo Legion Phone Duel have what it takes to appeal to mobile gamers?

Gaming has absolutely exploded over the course of the pandemic, with mobile gaming being an even bigger thing than expected. Mobile gaming in particular is accessible, convenient, and has a reasonably low cost of entry. Lenovo wants a chunk of that mobile gaming pie, and they hope to take it with the Lenovo Legion Phone Duel. Do they hit the mark?

The Legion Phone Duel is designed to remove any doubt that it is a gaming smartphone. Plenty of red accents, a sharp Legion logo, and lots of graphics on the back scream “gaming device.” It even has the Legion tagline “Stylish outside, savage inside” on there for good measure. Say what you want about it, but at least the brand knows who they’re targeting.

There are some interesting design differences between the Legion Phone Duel and the usual smartphone. First off, the two main camera modules can be found just off the very center of the rear of the device. The front camera is a pop-up affair, though it resides centrally on the edge of the right side of the phone, instead of the top edge. There are also two USB-C connectors on the phone, one on the bottom edge, and another on the edge opposite the pop-up camera module. Individually, these seem like odd changes, but once you consider that it’s a phone that’s meant to spend a lot of time in landscape mode, it makes a lot of sense.

It’s also a chunky piece of tech. It will take up most of the space in your pocket and will absolutely let you know it is there, thanks to its weight. Thankfully, it’s not exceedingly thick, so it won’t create a particularly unsightly bulge.

True to the tagline, Lenovo cut no corners giving this gaming smartphone a savage spec sheet. Our demo device, which has the higher spec of the two models available in the country, comes with a whopping 16GB of RAM (as much as my gaming laptop), 512GB of storage (again, the same as my laptop), and the highly capable Snapdragon 865+ chipset. It, of course, has the Adreno 650 GPU, and a gorgeous 6.65-inch 144Hz display that pushes a resolution of 1080×2340. To back this hardware up, it also features dual liquid cooling, and a split battery (5000mAh) that’s located away from where one would hold the device, to keep it comfortable during extended play sessions.

It also features built-in shoulder triggers for use in games like shooters, so you don’t have to worry about attaching external triggers to your device. These “buttons” are capacitive though and don’t offer any tactile feedback, but they do have a different texture from the rest of the device so you know you’re tapping the correct spot.

The Legion Phone Duel also has 90W Fast Charging that gets it from 0 to 100 percent in a blistering 30 minutes of charge time for the Blazing Red 512/16GB variant. All models also feature 5G connectivity, so you’re set for the future.

The first hurdles to get over are the phone’s size and weight. It’s got gravity to it, and one-handed usage is on the challenging side. It’s also a little slick, and since it’s quite a niche device, finding a suitable case might prove a bit of a challenge. Still, once you get accustomed to how to best handle it, it performs like a dream.

We could spend a paragraph or two talking about daily use, but really, there’s nothing to say about it except that it blows all those “normie” tasks away. I mean, with 16GB of RAM and an SD 865+ chipset, what else can you expect? And yes, it does also have 5G connectivity.

Where this phone really shines is gaming. I primarily play shooters, and on mobile, this means a lot of COD: Mobile and PUBG Mobile. A bunch of features really make this phone shine with those titles. Firstly, there’s that huge, bright screen that really lets you see what’s going on without having to squint. The shoulder buttons are a huge plus as well, as the claw method, while effective, is tiring to keep up for more than a few rounds of play. The shoulder buttons on the Duel are wonderfully responsive and don’t add bulk or complexity to the phone like external triggers do. Sure they’re not tactile, but they do a really good job nonetheless.

The thermal control of the Legion Phone Duel is also remarkable. Despite hours of play at a time during the holiday break, the phone didn’t get uncomfortably hot. The worst it got was noticeably warm when playing while charging, but even then, it was far from being unpleasant. They did a great job moving the warm parts around to where they have little impact on the player.

Apart from the solid gaming performance, the Legion Phone Duel also has up its sleeve a few tricks aimed at streamers. The location of the front camera makes streaming in landscape mode effortless, and additional functionality. There’s even a handy function that lets you get into the gaming features like trigger controls, screenshots, and a handy back record button that lets you take footage from the last 15 seconds of gameplay. Aside from being a solid gaming phone, it’s actually a streamer’s dream. You can even activate the front camera and overlay the footage from that right on the screen, without having to mess with anything else, which is extremely useful in cutting down the steps you need to get a stream running.

The price of just under PHP 50,000 is admittedly quite expensive, and I admit this isn’t for everyone, but if you’re a streamer, are dedicated to mobile gaming, or you want a highly capable phone that stands out from the rest, this is actually a valid value proposition, and one I don’t think you would regret.

Currently THE gaming smartphone to beat.