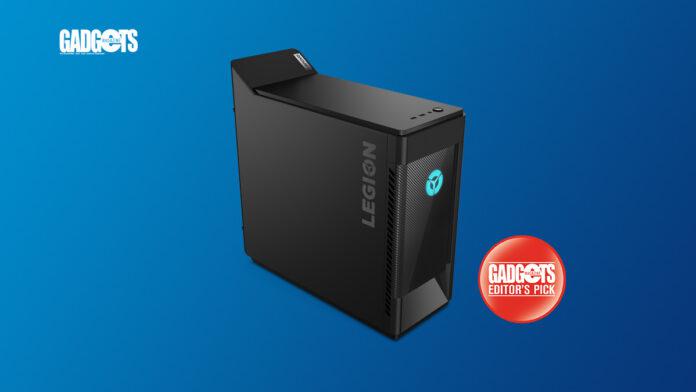 I have been using a budget gaming laptop for the last couple of years, and while it does have some benefits such as portability, gaming on a budget laptop doesn’t match the quality of gaming on a dedicated gaming rig. The Lenovo Legion Tower 5i is Lenovo’s new gaming station and after playing with it, it’s definitely on my Christmas list.

The Lenovo Legion Tower 5i features a mid-size casing. The size of the unit itself isn’t that big nor is it bulky, so you can easily fit it to your workspace. But it’s important to note that the unit itself is a mid-sized rig and won’t fit in a laptop space so you’d also want to check first. Moving the unit around isn’t much of a problem since it was not too heavy, and the added handle on the top of the device really helps in mobility.

On to the looks itself. The Lenovo Legion Tower 5i has a pretty toned-down look for a gaming rig. It has the Lenovo Legion logo on the front of the case which you can light up via the Lenovo Vantage software. The unit we had only had a cyan light and it was only on the logo, so RGB lovers out there, sorry to disappoint.

Additionally, the sides of the desktop only had metal sliders as you would find in regular cases. I actually hope that they would have a model variant that has a tempered glass panel on the side and some internal RGB just to fully bring out the gamer aesthetic.

Despite my ramblings, I actually have no qualms about the look for the device. It’s simple and fits most desk aesthetics.

Open the rig and you see the usual setup, the motherboard with the stock CPU cooler, the Nvidia Geforce GTX 1660 Super GPU, the 400W PSU, as well as the massive fans. There was only a single PCIe slot on the motherboard which might limit future expandability to just the Video Card.

To be honest, the Lenovo Legion Tower 5i is almost perfect. It can run demanding triple-A games at an average of 60 fps. You can stream on it, with the games running a smooth 60 fps. And you can definitely do some light to moderately heavy editing on it.

Since the Legion T5i is made for gaming, I decided to test some games on it. Lighter esports titles such DOTA 2 and Valorant yielded over 150 fps. games such as NBA 2K20 and Call of Duty: Warzone ran around the 80 to 100 fps mark. Lastly, graphically demanding games such as Assassin’s Creed: Odyssey, Control, and Tom Clancy’s Ghost Recon: Breakpoint ran in the circle of 50 to 80 fps all in ultra settings. What more can you ask for?

When it comes to benchmarks, the Legion T5i scored an average of 5817 points in PCMark 10 with 9020 points for essentials, 7677 for productivity, and 7716 for digital content creations. As for 3DMark’s Time Spy benchmark, it scored 5994 points average with the Intel CPU scoring 7083 points the GTX 1660 Super churning out 5836. Both pretty much around the expectation for the specs it carries.

I was thoroughly impressed with the Legion T5i, especially on the acoustics and thermal department. All throughout my time with it, the device never did reach the heat level when it will thermal throttle. The fans also didn’t produce any audible noise during testing. Just note that I tested the T5i on Lenovo Vantage’s Balanced thermal mode, so I wasn’t pushing the fans all out.

As a casual gamer, the specs of the Lenovo Legion T5i will suit you for most of the things you need. The Intel Core i5-10400F was just right for gaming and some light streaming. The NVIDIA GeForce GTX 1660 Super was also great for gaming at high resolution with decent FPS numbers.

I had a lot of fun with the Legion T5i. Spending a week with the unit, it has reignited my desire for my own personal desktop because of its power and versatility.

Judging the T5i based on its value was tough on me. As someone working on his own gaming rig, the price of the Legion Tower 5i is a bit too much compared on building individual parts. But there are a lot of reasons why buying a pre-built rig is also the right choice, such as the after-sales support and the almost non-existent troubleshooting you’ll need compared when building your own. With that being said, the Lenovo Legion Tower 5i is a definite option if you’re finding that gaming you so desperately want.

The Lenovo Legion Tower 5i is a great pre-built battle station for budding content makers and gamers.