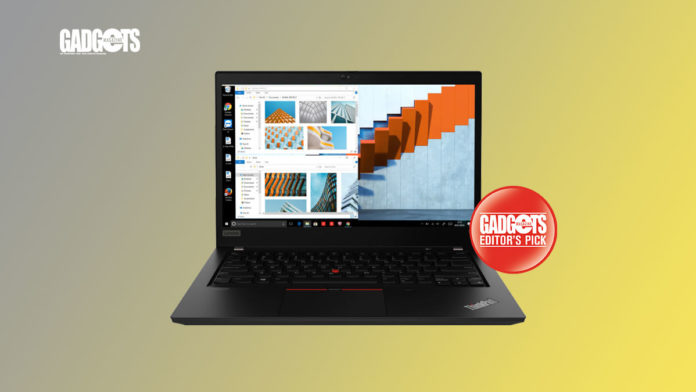 When we think of the Lenovo ThinkBook or ThinkPad, we immediately think of business laptops with their iconic design and, of course, the red TrackPoint in the middle of the keyboard. The Lenovo ThinkPad T14 Gen 1 has the look and feel of the usual ThinkPad, but this one offers more than the normal office laptop.

The Lenovo ThinkPad T14 uses the same old ThinkPad/ ThinkBook design, sporting a matte black design with the red accents on the logo and trackpad buttons. This laptop wouldn’t look out of place in a conference room nor a café. For me, this a great case of “if it ain’t broke, don’t fix it,” as honestly, I am a fan of the ThinkBook/ThinkPad design.

Moving on, the ThinkPad T14 has a 14-inch IPS display with FHD resolution. While the screen does look good, it is a bit dim for my taste, even at max brightness. What really made me fall in love with the ThinkPad T14 was its keyboard, and I will have more to say on this in the user experience section. The trackpad is also great, and I found myself using it more often than the cheap Bluetooth mouse that I would normally use. Beside the trackpad is the fingerprint reader.

The Lenovo ThinkPad T14 Gen 1 is powered by the new AMD Ryzen 5 PRO 4650U, which also has integrated AMD Radeon Vega graphics. Our review unit had 8GB of RAM and 256GB of NVMe SSD storage.

In terms of the hardware specs, the ThinkPad T14 with its AMD Ryzen 5 PRO surprised me. I ran a couple of benchmarks, and the results came out great for the laptop. It scored 1151 points in Single-Core performance and 5760 points in multi-core for Cinebench R23. Geekbench 5 has it at 1062 points for single-core and 3767 points for multi-core performance. Lastly, PCMark 10 scored it at 4372 points overall. Long story short, the ThinkPad T14 is a capable machine. It may not be the fastest out there, but it won’t let you down either.

Using the Lenovo ThinkPad T14 was a blast. Like I said, typing on this laptop was extremely satisfying. Usually, I would have trouble adjusting to new laptops because of the key spaces, but with the ThinkPad T14, it felt natural to type on. If there’s one thing I had a problem with, it was the positioning of the Fn and left Ctrl keys.

Another great feature of the ThinkPad T14 is its speakers. The speakers are loud for their size and could easily fill a room. The sound quality is good, thanks to Dolby Audio certification. In addition to the audio, another surprise standout for me is the webcam. Lenovo has fitted the ThinkPad T14 with a 720p IR webcam that, despite its specs, captured good selfies and saved my skin in classes where the professor wanted open cameras.

As a ThinkBook, Lenovo has fitted the ThinkPad T14 with some security features such as fingerprint log-in, the ThinkShutter privacy cover, a microphone mute Fn key shortcut, and a security chip. Adding to these is protection offered by the AMD Ryzen PRO processor with features such the AMD Memory Guard encryption.

The laptop also performs great in the graphics department. Since the laptop already has integrated graphics, it can handle some light photo editing. I also tried a bit of gaming, just for the fun of it. CS: GO ran at a max of 27fps on high settings and 35fps on medium settings. Not the greatest for running newer titles, but the classics will definitely run on this with no problem.

Using the laptop for both class and work, I found that the battery lasted about five to six hours with heavy usage (work, max brightness, and an additional secondary monitor). Thankfully, charging time is extremely fast. The laptop can go from 4% juice to 50% in just 30 minutes, and a full charge in about two hours. You can also bring the 65W charger anywhere since it has a small form factor.

At around PHP 52,000, the Lenovo ThinkPad T14 is one of the cheaper Think-series laptops. With the line-up’s storied history, reliability, and functionality, the ThinkPad T14 is a good choice for everyone who wants a fully functional laptop.

The Lenovo ThinkPad T14 is definitely a must-have for a young professional.