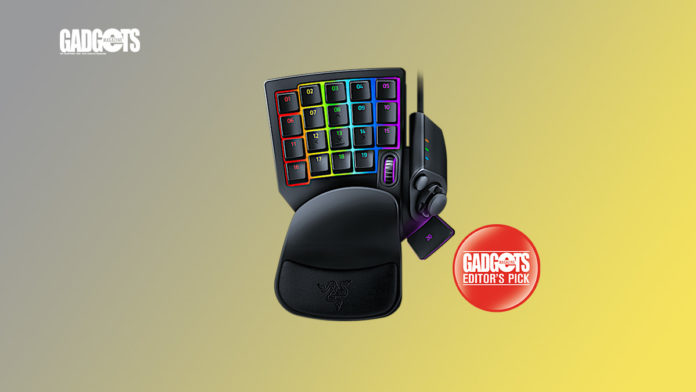 I have been happily playing games on the PC since I started with my first 3D shooters in the mid-90s. This constitutes the majority of my life, and I don’t think that’s going to change. As such, I have accumulated a fair amount of experience, and along with that experience, a fair amount of peripherals. One of the ones that I have grown to love very much is the keyboard controller. I have gone through the core Razer gaming claw lineup, from the first Tartarus, the Orbweaver, and now, the subject of today’s review, the Razer Tartarus Pro.

The Tartarus Pro carries the same core design as the Orbweaver and the first generation Tartarus, in that it’s a small keyboard that’s meant to be used with your left hand. There’s a wrist rest, a palm rest, and the same keys that your left hand would normally reach on a standard keyboard. There are 19 keys on the main face, a scroll wheel, and on the side, where your thumb can reach, there’s a single key, an eight-way D-pad, and a single clocky button. It’s done in a matte, not quite rubberized finish on the palm and wrist rest, and a matte hard plastic for the frame. There’s also a long USB cable so you can plug it into your computer without any difficulty.

The device has per-key chroma control, so you can set any combination of colors you want, and with the included software, you can even set it to change depending on the game you’re playing, what the audio is doing, your keystrokes, or a number of other variables.

The keys themselves have analog-optical, so if you’re looking for the usual clicky mechanical switches, you’re out of luck. It is, however, these keys that make the claw controller special. Each of the main keys on the face of the device and the single thumb key on the side can have two actuation points, which lets you bind a function for a shallow press, and a deeper press, which sounds great, at least on paper.

First things first: no, it doesn’t have mechanical keys. I know; it’s a bit of a bummer, particularly if you like tactile switches. If, however, you’re like me and prefer linear mechanical switches, you’re in luck, as these analog-optical switches feel basically like deep-actuating Cherry Black switches, complete with a satisfying tap at the end of travel. I rather like the feel of the switches on the keys, though as Cherry Silvers are my keys of choice, I’d have liked a bit less force necessary, though I do get you need some resistance to get the dual actuation thing to work.

Hand position is reasonably comfortable. I wear a size M for gloves, and while the top row can be a bit of a reach without repositioning, tapping on any of the keys in the middle row poses no problem.

Unlike the Orbweaver, there’s no adjustability to the ergonomics of the Tartarus Pro. The wrist rest, thumb controls, and palm rest are all in fixed places, so if it doesn’t fit your hand, thems the breaks.

The keys, at least, are very responsive, and if you have any experience with any of Razer’s other claw controllers, you can get right on to it with no problem. This is made better with the exceptionally useful

software that allows you to realize the claw’s maximum potential, including recording macros, changing the lighting (or letting the lighting change on its own, for example, depending on your Overwatch character), and set pre-configured profiles.

It’s not all great, though. The main feature of this over the previous generation of claws, as well as the non-Pro version, is the inclusion of the aforementioned analog-optical switches. On paper, the concept is great. A partial press triggers a keystroke or function, and a deeper press triggers another function. In practice, it falls quite flat, as the deeper press can’t really be triggered without first triggering the function bound to the shallow press. Yes, it will work sometimes, but the majority of things I wanted to do in shooters are hindered by this oversight.

For example, I bound the spacebar and ctrl to the thumb key, but whenever I want to scramble over cover in The Division 2, the game would first register the Spacebar press and snap to cover before scrambling over. It might be more useful in MOBA titles, with macros, but it’ll all depend on the bindings.

Where I did find more use for the two functions is editing. I edit a podcast, and having twice the controls within easy reach of the fingers of one hand made the whole editing process that much more convenient. You can also set the threshold for when each press triggers so you can customize the response to your liking.

The ergonomic hand position also does a fair share to reduce fatigue and is part of the reason I can’t live without a claw controller — it lets me play or work for hours without the hand strain.

This is honestly a mixed bag. For between PHP 6,000 to PHP 7,000, one would have to have a compelling reason to use it, such as hand strain, the need or macros, or possibly competitive gaming, so it’s clearly not for everyone. For those that do need it, though, there’s really no other alternative except the older Razer claw controllers. The non-adjustability drops value even lower, but again, not having any real competition out there is a compelling reason in itself.

Works great as a controller claw, but the opto-mechanical gimmick falls flat.