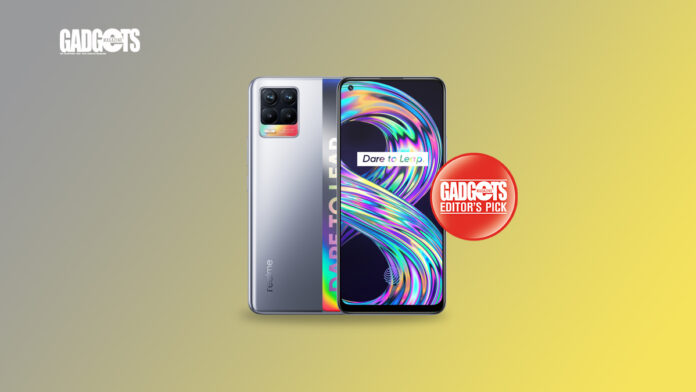 Competition in the smartphone race hasn’t slowed despite everything that’s going on, and it seems like every month, there’s a new device that’s vying for our attention. Amidst the stiff competition though, one brand continues to stand out, and that’s realme. I realize I’ve said it before, but the brand continues to deliver superb value for money, in a market that continues to push the boundaries of each price point. We take a look at the realme 8, a solid mid-ranger that upholds the values of the brand.

The design of the device is standard fare for a modern smartphone. The front is home to a large 6.4-inch 1080 x 2400 display with slender bezels, a slight chin, and a pinhole camera on the top left corner. The fingerprint sensor is located under the screen, minimizing visual clutter elsewhere on the device, and giving a slightly more premium feel to the overall package.

There are only three buttons on the phone, and they’re all on the right edge with the phone facing the user: a volume rocker, and the power button just below that. The opposite edge is where you’ll find the SIM tray, and on the bottom is a USB-C connector, along with the speaker grille and a 3.5mm headphone jack (yay).

The back is a little busier, with a quad-camera and flash module in a raised, rounded square on the top left corner, the realme branding on the left, and “DARE TO LEAP” written in an iridescent font in the middle of a visually striking colored strip. It’s not particularly subtle, but at least there won’t be any doubt as to the brand you have in your hands.

The realme 8 punches past its weight class. With a whopping 8GB of RAM, 128GB of expandable storage, and the combination of a Helio G95 chipset and Mali-G76 GPU, it’s no slouch. There’s also an impressive 64MP main camera supported by ultra-wide, and macro cameras, as well as a depth sensor for impressive photo effects. While our particular review unit doesn’t have 5G, it does still boast robust LTE connectivity, which is plenty for mobile needs. You also get Bluetooth 5.1 with all its power-efficient, low-latency goodness, and a large 5000mAh battery. To top up its large power reserves, it takes 30W charging, which gives the device 50 percent charge in less than an hour, and a full charge in a shred over an hour.

The large, gorgeous display is an OLED affair, so you get deep, rich blacks, and impressive image quality overall. Front camera duties are handled by a 16MP Pinhole deal, so video calls won’t have you scrambling for a laptop.

I’m a sucker for a well-designed mid-range phone, as most people don’t need all the bells and whistles of a top-tier device, making the sky-high cost difficult to justify. Even in the highly competitive mid-range market, however, the realme 8 shines.

The phone feels great. The brand clearly didn’t skimp on materials, and while the phone is done in plastic, it doesn’t feel flimsy, and certainly won’t get mistaken for a cheaper device. In fact, it feels more solid than its price point might make you think. The combination of heft, thinness, and a slick outer shell makes it a little prone to dropping, so if you have butterfingers, you might want to slap on the included case just to be safe.

Swapping to this as my primary phone for the duration of the review was painless, thanks to realme’s Clone Phone app. I was switching from a device by a different manufacturer, and even then, the process took just a little longer than the time it takes to download all the apps.

Once all the sign-ins were complete, I got right to it, and I’m exceedingly happy to report that the experience wasn’t perceptively different from my flagship’s performance in daily use. The fingerprint scanner unlocks the phone in no time flat (though with a few false negatives here and there), and once you’re in, navigating the realme UI was totally painless.

Given the WFH nature of business these days, I relied on the realme 8 for a lot of my online meetings, with it serving as the main screen for the call. Even when people were sharing their screens in the meeting, the large display served its purpose, making slideshows legible without much difficulty. The front camera is also fantastic, making the most of the available light, and displaying my video with plenty of clarity. Nobody knew I wasn’t on a laptop.

The main cameras are startlingly clear. 64MP isn’t anything to sneeze at, and even indoors, where light can be a problem, the main shooter performs great. The output improves even more with good lighting. As a matter of fact, I use the phone as my main video conferencing camera when I need to be on my desktop. It blows built-in webcams out of the water, and I’ve gotten compliments on its performance. I’ve also used it to shoot product videos and photos with plenty of quality to keep our art department happy. I do wish I could take it out for travel photos, but everything about its capabilities has me convinced it would do an excellent job out in the wild as well.

Battery life is stellar. With the endurance to keep going practically non-stop for a day’s worth of use, it’s a trouper. And even if the constant meetings drop your battery down to critical levels, the included charger does do a fantastic job of topping up the internal cell quickly. 50 percent charge in half an hour isn’t an exaggeration, and in my book, that’s a more important metric than time to a full charge. Their claim of 100 percent battery in about an hour is also reasonably accurate, though of course slower unless you leave it charging and idle, so I was impressed.

It’s hard not to give the realme 8 full marks for value. With an SRP of PHP11,190 for the 8GB+128GB version, it’s quite the steal. A massive screen, great battery life with fast charging, and awesome camera performance all tick the right boxes, and again, while there are some places corners have to be cut, realme proves that it knows on which features to spend.

Another great-value smartphone from realme!