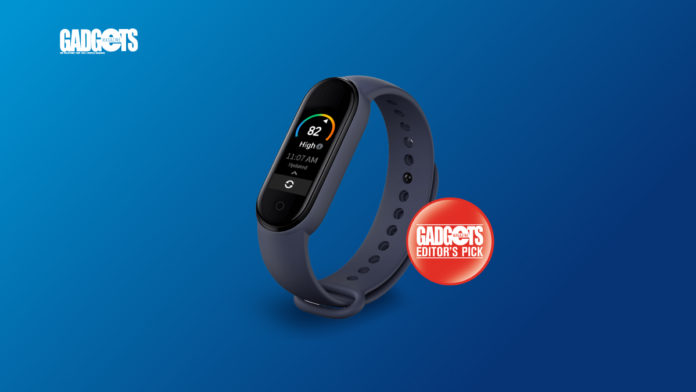 The Xiaomi Mi Band fitness tracker has dominated the budget fitness band market for a few years now. The Mi Band 5 is the brand’s fifth-generation tracker and, after spending a few months with it myself, I can see why Xiaomi is on this spot.

At first glance, the Mi Band 5 doesn’t differ much compared to its older bro, the Mi Band 4. It still features the same oval design and still removable from the rubber band.

The Mi Band 5 does have some minor improvement from the Mi Band 4, in the looks department, it has a larger AMOLED display, now sporting a 1.1-inch screen with a 126 x 294 resolution and a maximum 450 nits of brightness. Additionally, the Mi Band 5 is now charged with a proprietary magnetic charger that hooks at the back of the device so you won’t need to remove it from the band itself.

Most of the upgrades come in form of the hardware. The Mi Band 5 comes with an improved sensor, now a high-precision 6-axis sensor (3-axis accelerometer and another 3-axis gyroscope), and a new PPG heart rate sensor. The new sensors give the device 24/7 heart rate tracking as well as sleep monitoring.

The Mi Band 5 is also 5 ATM waterproofed which means you can now wear the band as you swim. Speaking of swimming, it’s now included in the 11 sports mode you have with the Mi Band 5.

Some additional upgrades include the new music and camera controller via the device’s Bluetooth 5.0 connection

I bought my Mi Band 5 a couple of months ago out of sheer curiosity and maybe a lie that I’ll be working out during quarantine – this didn’t pan out.

Installing the device and pairing it with the accompanying Mi Fit app was pretty painless. Just open your phone’s Bluetooth and then the Mi Fit app (which can be downloaded via Google PlayStore or App Store) and it’ll pair by itself. Do note that you’ll need to fill out some details on the app first in order to set goals and have the device note some details about you’re built.

Once the setup was finished, you’re free to use the band. One thing I noticed was that the Mi Band’s UI needed some getting used to. You navigate the UI by swiping on the screen, but swiping left and right gives you access to your shortcuts, while up and down gives access to the more important features such as the workout menu and some vital stats.

The Xiaomi Mi Band 5 still doesn’t its own GPS, instead, it uses your phone’s GPS as its reference GPS, but for the price, I am not complaining; and besides you’ll also bring your phone during your morning jogs anyways. Unfortunately, the pandemic has locked me indoors so I still couldn’t test the accuracy and connection stability of this.

What I have enjoyed and used the most are the Mi Band’s music and camera control features. The Mi Band 5 can finally control music playback and volume via Bluetooth, and the camera shutter if you have your phone’s camera open. The camera function showed almost no latency when taking pictures and videos, pretty cool if you ask me.

One of my qualms with the device is that the sleep data is only accessible via the Mi Fit app. I was confused during the first few days since I knew that it had sleep monitoring but it was not showing on the device itself. Another thing I was disappointed about was the battery life. The previous Mi Band has 20 to 30 days of battery to a single charge double the Mi Band 5’s capacity. Thankfully charging it needs only an hour and a half.

Coming in at the sub-PHP 1500 price, the Xiaomi Mi Band 5 is a good steal for people who don’t have their own fitness band/ smartwatch yet. If you know someone who’ll want to lose some holiday gains, then the Mi Band 5 might be the perfect gift for Christmas.

Concern about dental hygiene is part of my OCD complex, and I do go through an elaborate daily routine of oil-pulling, brushing with an...
Read more

A Fitbit gift guide for the holiday season

If you want your loved ones to keep healthy, check out the Fitbit gift guide below, and find great deals that match your budget. For...
Read more