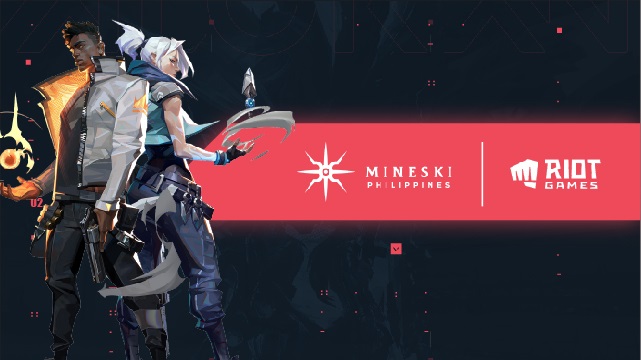 ”Players have asked and we’re excited to answer. In Southeast Asia, the appetite for VALORANT esports has been tremendous and we are pleased to partner with the region’s leading esports organizations, one of them being Mineski Philippines, to introduce new heights of competitive play to the region,” said Chris Tran, head of esports at Riot Games Southeast Asia, Taiwan and Hong Kong.

Mineski Philippines will be making use of this license to run official VALORANT esports tournaments through the Philippine Pro Gaming League (PPGL), which it jointly operates with Globe Telecom.

In addition to these 2021 plans, a nationwide VALORANT tournament is already underway in the Philippines via VALORANT First Strike: Philippines. The eight teams that will battle it out in this PHP 500,000 tournament will advance from the Mineski VxV community cup, which has its registration ongoing via bit.ly/MineskiVxVReg. Registrations close on October 28, 2020.

At the collegiate level, Mineski’s Youth Esports Program will also be running official VALORANT tournaments for aspiring pro-gamer students next school year. Presently, a national student VALORANT tournament is being held in the form of the YEP’s National Interschool Cyber League, with a prize pool of over PHP 150,000 and weekly broadcasts on the Youth Esports Program Facebook page.

“We’re very excited to bring in one of Riot’s biggest titles to the PPGL and we are anticipating a huge turnout from the players and fans next year. This is in line with our commitment to produce world-class teams while growing gaming communities through the Philippine Pro Gaming League,” said Navarro.

“For us at the Youth Esports Program, this is a big opportunity to develop a new generation’s esports scene. We expect our collegiate esports athletes to give their best and earn pride for their schools,” shared Marcelo.

VALORANT, a character-based tactical FPS released by Riot Games earlier this year, has already become one of the world’s fastest growing esports, attracting massive online viewership and the commitment of numerous established professional players from a wide range of competitive backgrounds. It is poised to become one of the Philippines’ largest and most competitive esports titles.

With Sylvanas Windrunner’s shattering of the Lich King’s Helm of Domination, the restless Scourge begin to wreak havoc across Azeroth. Now, champions of the Horde...
Read more

VPGAME and Mineski Global collaborate to nurture esports in SEA