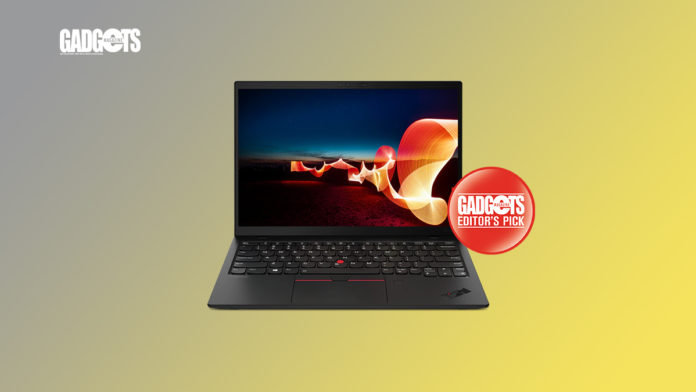 The Lenovo ThinkPad X1 Nano follows the same design choices found in all ThinkPads. It has a matte black finish along with some minor red accents. The major difference between the ThinkPad X1 Nano from the rest of the ThinkPad line is its small form factor. The device is just 907-grams, with a dimension of 13.87×292.8×207.7mm, small enough to be considered a 12-inch laptop.

Once you open the laptop, you’ll be greeted with the 13-inch 2K display along with IR and Webcam with the privacy switch. Also on the cover are the four 360-degree microphones. The keyboard is back-lit with evenly spaced keys and, at the center, the iconic ThinkPoint nub. On top of the keyboard are two Dolby Atmos-supported speakers. Beneath the keyboard is the trackpad which has a glass-like feel. Beside it is the fingerprint reader. On the right side of the device is the power button, while on the left are the headphone jack, two USB Type-C Thunderbolt 4 ports with the top port also serving as the charging port.

The Lenovo ThinkPad X1 Nano is part of Intel’s Evo platform, the brand’s official certification for “ultrabooks”. Being part of the Evo platform, the Lenovo ThinkPad is powered by an 11th gen Intel Core i5 – 1130G7 processor with integrated Intel Iris Xe graphics. Our review unit has 8GB of RAM with 500GB of SSD Memory. If you want more juice, Lenovo offers other configurations including the 11th Gen Core i7.

Benchmarks place the ThinkPad X1 Nano at the upper echelon of recent ThinkPads. Geekbench 5 had it at 4697 for multi-core, PCMark 10 gave it a total of 4294 with well-balanced workability of essentials, productivity, and some digital creation. Lastly, Cinebench R23 pegs the Intel Core i5 – 1130G7 at 3982 for multicore and 1194 for single-core.

And in what is now a tradition of trying to game on different laptops not meant for gaming, I tried playing a round of Valorant on the ThinkPad X1 Nano. Honestly, I was surprised that it could even run the game (considering the graphics weren’t made for gaming), and minus the occasional frame drops and low graphics the game was actually playable on the Thinkpad X1 Nano. It’s not a great experience but, hey, not every ultrabook can game.

I am truly amazed at how Lenovo made the ThinkPad X1 Nano. After unboxing the device I was immediately taken back to the early 2010s during the peak of the “netbooks.” The ThinkPad X1 Nano looks and feels like a netbook, but underneath its hood is a beast, thanks to the 11th Gen Intel Core i5 processor.

It’s impressive how Lenovo managed to fit a 13-inch screen on a 12-inch chassis. What’s more impressive how they managed to still retain that great typing experience on this small form factor. Contrary to how the laptop looked, typing wasn’t cramped at all with the keys evenly spaced. The only problem was that the Ctrl and Fn were interchanged (again) but some tinkering in the Lenovo Vantage app once again did the trick.

Another impressive feature of the Lenovo ThinkPad X1 Nano is its audio and display. With its small form factor, the X1 Nano became my personal favorite pre-bedtime Netflix/ Youtube buddy. Its display was amazing, and the audio from the Dolby Atmos system was fairly loud for its size without any noticeable distortions.

Charging time is also fairly decent. From 14% it reached 54% in 30 minutes and 87% in one hour, confirming its 80% in an hour rating. When the device reached 90%, charging slowed down, needing about another hour to reach the 100% mark. The feature is probably intentional, intended to keep the battery healthy for much longer.

If there’s one thing that disappointed me about the ThinkPad X1 Nano, it’s the lack of I/O ports. There are only two USB-C ports on the device and one of them is also the dedicated charging port. You’ll definitely need an external hub if you need to plug in some peripherals. The upside is both of the ports are Thunderbolt 4, so data speeds shouldn’t be a problem.

The Lenovo ThinkPad X1 Nano strikes hard for its size.