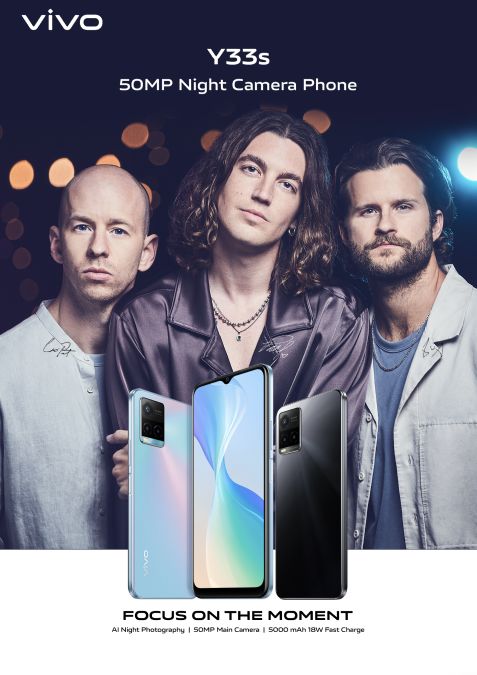 The new vivo Y33s excels at taking great photos and videos, creating excitement among the young and trend-conscious Filipino fans of the global smartphone maker.

There is just no easier way to share cool personal updates on social media, than with a vibrant picture or video. The vivo Y33s captures your best moments clearer. Described in pilot reviews as a solid mid-end phone with uber strong photographic prowess, this vivo phone promises to have what it takes to be your all-day fun camera, to capture with a clearer shot your daily stories, in all its flattering details.

Just like its equally nifty predecessor the Y31, the vivo Y33s lives up to vivo Y-series’ chic reputation as being feature-packed yet affordable despite its serious hardware power for fun photography.

Among the phone’s biggest wow-factor is its Super Night Selfie, which allows for taking great selfies even in poor lighting conditions. Its awesome 50MP rear camera is the main star in its triple-camera setup at the back. Equipped with lightning-fast f/1.8 aperture or opening, you never had to struggle just to take clearer shots, especially when capturing spur-of-the-moment fun times. Definitely perfect for nighttime outdoor romps, in the garden, by the moonshine, the vivo Y33s’ powerful camera is also equipped with an EIS (electronic image stabilization) technology that provides stability to both photo and video footage.

Allowing ample space to run 25 apps in one go, the smartphone is powered with an 8GB + 4GB of Extended RAM that helps deliver a lag-free performance. Paired with an octa-core MediaTek Helio G80 processor, this phone is also excellent for all-day gaming. It even has built-in modes which allow users to have more control over incoming calls, such as answering simultaneously (and hands-free) while playing, plus pre-selectively accepting or rejecting specific calls, automatically.

The phone’s huge 5000mAh battery is equipped with an 18W Fast Charge, which comes in handy for longer than usual video shoots and selfie sessions, and even for power-hungry game sessions. Now, you longer need to be tethered to the wall due to battery frailties just when your online phone sessions begin to get more exciting.

For the young and restless TikTokers, vivo Y33s’ gyro-EIS capability should be a huge come-on, as it allows them to broadcast their hilarious antics and cool dance moves with sustained clarity. Combined with its built-in excellence at night selfies, nothing can stop their budding social media stardom now from shining even after dark.

Even leisurely mobile gamers get a thrill and performance upgrade with this phone, which is definitely a huge plus factor. Who knows, this might even be the edge you need to beat your mobile game buddies at any day.

The new vivo Y33s is available in vivo stores and kiosks nationwide, and via the vivo Official Stores in Lazada and Shopee for PHP12,999.

Learn how the new phone can help you take clearer photo shots, and focus on the moment by visiting https://www.vivoglobal.ph/ and vivo’s official Facebook, Twitter, and Instagram pages.

Another huge CAMON 18 sale is coming your way this payday!