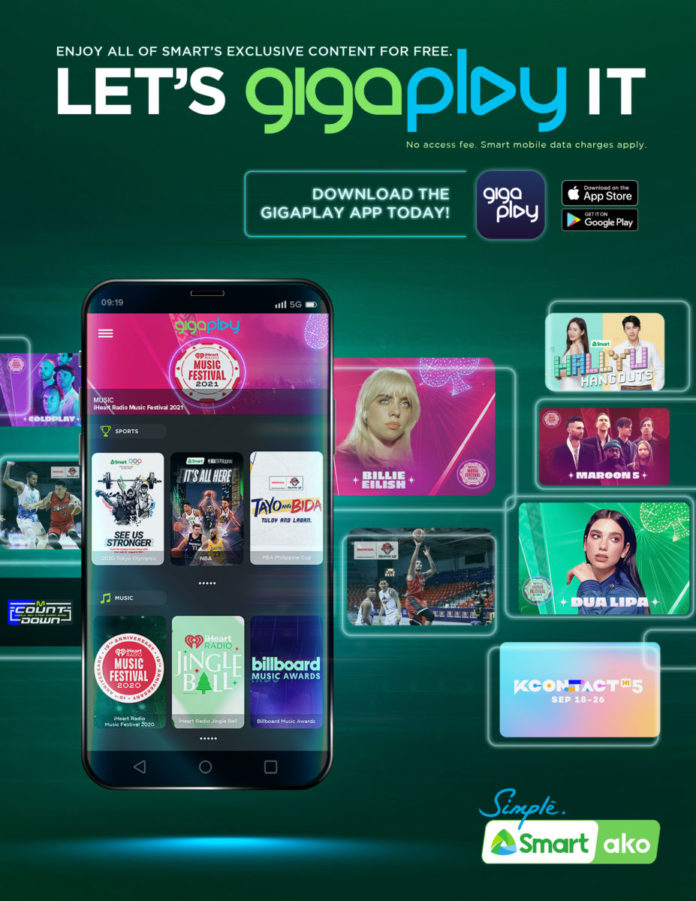 Now downloadable on the Apple App Store and Google Play Store, GigaPlay has curated live and on-demand content that are optimized to stream seamlessly on the country’s fastest mobile network.

The app is available to all Smart Prepaid, Smart Postpaid, TNT, and Smart Bro subscribers who only have to connect to their mobile data, select the video they want on the GigaPlay app, and watch it to their heart’s content anytime and anywhere.

“We Filipinos know what we want when it comes to streaming and through GigaPlay, we want to make it simple and easy for Filipinos to access and watch what they love, powered by the country’s fastest mobile network. GigaPlay builds on our efforts to enable our subscribers to live the GigaLife, with all their digital needs and the latest technology right at their fingertips,” said Jane J. Basas, SVP and head of consumer wireless business at Smart.

What to watch on GigaPlay

For its initial salvo, GigaPlay will feature the Philippine-exclusive stream of the annual iHeartRadio Music Festival 2021, which includes performances by Billie Eilish, Coldplay, Dua Lipa, J Cole, Khalid, Maroon 5, and other top artists on September 18 and 19, from 10:30 am onwards on both days.

GigaPlay will also feature yet another Philippine-exclusive stream of the upcoming KCON:TACT HI 5 virtual concert happening on Sept. 18 to 26, which includes performances by today’s biggest K-Pop artists, including MAMAMOO, AB6IX, PARK JIHOON, ATEEZ, and many more, as well as the weekly Korean music show M Countdown every Thursday at 5:00 PM.

For avid basketball fans, GigaPlay is set to stream the ongoing 46th season of the PBA Philippine Cup and the forthcoming NBA season via NBA TV live.

The new streaming app will also broadcast the next seasons of the UAAP games and the PVL.

Boost your streaming lifestyle with the GigaLife App

GigaPlay is best experienced when you have all your digital needs via the GigaLife App, where all of Smart’s latest data offers, perks, and privileges are but a few taps away.

Also available on Google Play Store and the Apple App Store, the GigaLife App makes its most comprehensive data offers easily accessible to subscribers so they can avail of promos that suit their passions and lifestyle. GigaLife App also lets users conveniently check their account and promo balance, keep track of their data usage, and transact seamlessly with GigaPay, its latest in-app payment feature.

GigaPlay is powered by the fastest 5G network in the Philippines as reported by Ookla®, the global leader in internet testing and analysis.  Smart also recently reaffirmed its dominance as the country’s fastest mobile network for the fourth year in a row, based on analysis by Ookla of tests taken with Speedtest® covering the Q1-Q2 2021.