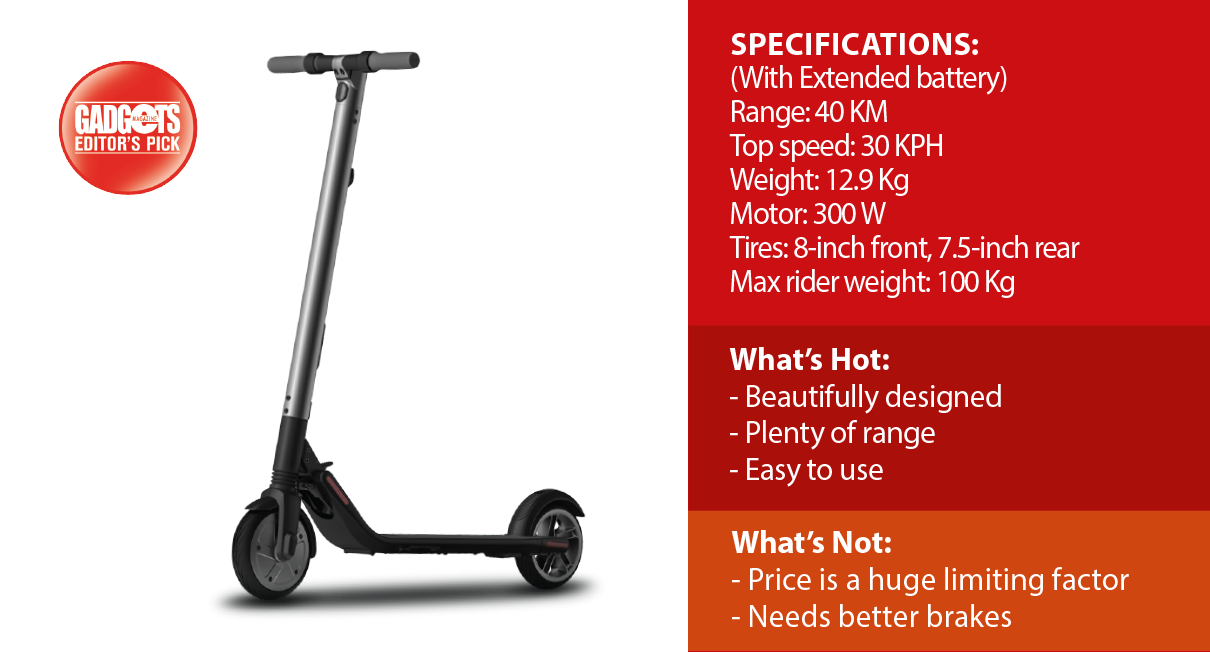 If you have lived in the Metro for any length of time, you’ll know the purgatory which is city traffic. People take it as a matter of course, and an hour-long commute isn’t really seen as unusual. This is no way to live. I, for one, have a lot of things I’d rather be doing than sitting in my car, contemplating the reasons behind my existence. Determined to beat the systemic traffic that plagues us all, I went and got myself an electric scooter—the Ninebot Segway ES2. This particular model is kitted out with the extended battery, giving it even more range, and a greater top speed, at the expense of a little more weight.

As far as currently available electric kick scooters are concerned, this is one of the sleeker, more aesthetically pleasing ones you can get your hands on. Elegant lines flow from stem to stern, with smooth curves from the handlebar, down the front wheel, and across the floorboard to the rear. It looks as much a mode of transportation as it does a well-designed piece of futuristic furniture. Nothing sticks out awkwardly, and even the latch that collapses the entire scoot tucks away nicely, to keep the neat visual effect.

Done in a simple, understated aluminum gray with black here and there, it looks like something straight out of a science fiction film, or the concept car section of a motorshow. Lights, controls, and even the kickstand are all integrated neatly, making it a great example of form holding its own against the requirements of function. The addition of the extended battery does break the harmony slightly, but it still remains reasonably whole, and is worth the additional bulk.

The heart of every electric scooter is the motor. In the ES2, it’s a 300W affair, with a 187 Wh battery internally. This gives the ES2 the ability to carry a 220-pound rider, and run a maximum of 25 KPH, with a maximum range of 25 KM on paper. Where the ES2 meets the road is two sets of solid rubber tires, and to mitigate the bumps a bit, you’re given front and rear shocks. This is all done while keeping the overall weight of the scooter at about 27.5 pounds. Additional range and power—over 40 KM, and an improved top speed of 30 KPH, plus more torque—can be had with the addition of an external battery, at the cost of about two pounds.

The ES2 also has a simple dash that gives you a speed readout, as well as battery gauge, and mode indicator. The power button also serves as the switch for the headlight, and mode selector. There’s also a single brake on the rear that is activated by stepping on the mud guard. Apart from the brake-activated warning light, it does also have additional lights that can be controlled via the downloadable app.

To get a feel for the ability of the ES2 to handle a daily commute, I decided to take it to our West Avenue office and back to my house in Katipunan for a few days. The route took me along crowded Kamias Street, across EDSA, up the steep part of Kamuning, and through the frankly terrible Timog Avenue, then across the Quezon Avenue pedestrian overpass. That’s about a 7 KM ride, one way.

The top speed with the extended battery is about 30 KPH. Something you should know about the ES2 however, is that apart from the rudimentary brake on the rear, you don’t have any mechanical brakes available to you. There’s an electric brake on the front that is great at scrubbing speed, but not so much at bringing you to a complete stop. The back brake is powerful enough if you can get enough weight on it, though that might not be the easiest thing for just anyone. Should you decide to take this scooter out on your daily commute, be careful to watch your speed, be aware of the road to avoid the need to stop suddenly, and practice panic stopping with the rear step brake.

Solid tires are notorious for being bumpy, but the shocks on the scooter are able to keep those manageable. It’s still not as smooth a ride as even unsprung pneumatic tires, but it’s certainly better than nothing.

The ES2 is agile. Small 8-inch wheels combined with a little leaning in the correct direction allow you to sneak smoothly into small gaps, or deftly avoid bone-rattling obstacles on the road. This is all for the best, as any sizeable rut will get you from 25 KPH to splayed on the ground in no time flat.

Folded up, the scooter is reasonably easy to take around, though the extended battery does get in the way of the best spot to carry it. If you have the room, the best way to move it around is to push it unfolded. The latch that keeps the scooter folded also takes a lot of strain. I actually snapped mine putting the scooter away, so try to be careful to keep it from pivoting so you save yourself the hassle of ordering a replacement.

While the ES2 is an excellent scooter, the price, particularly when coupled with the extended battery that really makes it shine, is a little prohibitive. It’s about 30k for the scooter, and another 8k or so for the battery. Alternatives can be had for less than that, but then again, this is a legit Segway, with great after-sales support, and a good name to the product, so therein lies the trade-off. It’s much more than a toy, and a capable commuter in its own right, just be aware of its limitations on your commute.

If you make lots of short trips to nearby places, this is a viable option.