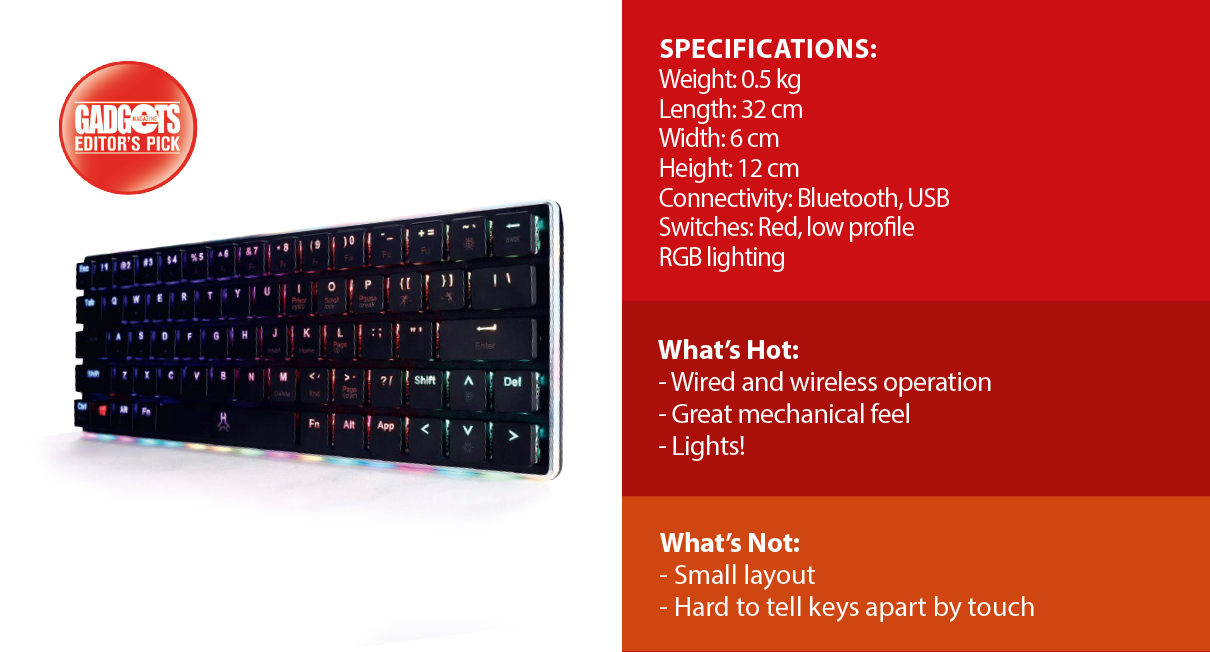 I wear a few hats in my life. The first is tech journo. This has me sitting long hours, bashing away at my keyboard, trying to get many, varied thoughts across. The second is traveler. That involves a lot of packing, small bags, and time away from power outlets. The final one is gamer. This involves some rather specialized, demanding hardware. It’s a rare occurrence to find gear that caters to all those things all at the same time, but RAKK, a local peripherals manufacturer seems to have their eyes set on just that with the Kali. Does it hit the mark, or is this another case of getting spread too thin?

There’s nothing particularly fancy about the Kali. It’s a very flat keyboard that’s got all of XX keys. Compact, and done in a very simple, unassuming black, its main design feature is that it’s nice and simple. Flat, square keys, a metal base, and a plastic body make it about average, and keys that appear to be printed on quite well, round the package off. A side-effect of its compact size, however, is the placement of the right “shift” key, which sits worryingly close to its neighbor, up. A nice, compact keyboard, in gamer black, with the company logo all conspire to make it average. No complaints there though.

For what initially looks to be a rather plain keyboard, the Kali has a few surprises. First off, it’s mechanical. Though it’s got low-profile red scissor switches, the feel is actually not that far removed from the full-size ones. There’s a little less travel, but you still have the light actuation and quick key response people love about the reds. Secondly, there’s RGB lighting. Say what you will about it, but typing in the dark made much less of a chore with them, and since you can pick colors, intensities, and lighting styles, there’s no reason not to find one that you can actually enjoy. Whether you’re looking for the reliability of a wired connection or the convenience of wireless, this keyboard will be happy to oblige. You even have three separate Bluetooth profiles, so you can quickly switch the connection among three devices with the simple press of a few hotkeys. I honestly can’t think of another keyboard that has quite the same functionality as this. Just be a little careful of the main power switch, as it seems a little flimsy.

I got the Kali hoping to get a decent compact keyboard for gaming since carrying around a full gaming laptop is hassle enough without the extra external keyboard. It arrived in a surprisingly small box, with honestly better packaging than I had expected. Nestled behind a clear plastic sleeve, you get the Kali, a braided fabric microUSB cable, and the device manual.
The device itself is about as thick as a deck of standard playing cards, and doesn’t really take up a lot of space on the table. Whether on a small coffee shop table, or a cluttered desk, you won’t have any trouble finding space.

Wired, it works fine—just plug it in and go. Bluetooth setup can be a little tricky though, as the manual is helpful, but cryptic. There will be a lot of trial and error involved in connecting multiple devices via Bluetooth, or configuring the lights. Speaking of the lights, if you’re not a fan of multi-colored flashing ones, you might want to take a photo of the manual and keep it somewhere you can find it easily. Going through the different functions isn’t something you can commit to memory with any ease, so you’ll be referring to the instructions a lot. Trust us on that one.

Another really great thing about the Kali is the size. From the bottom of the base to the top of the keycaps, it doesn’t even go past the base of my tenkeyless MX Blue mechanical keyboard. Since you also give up the function keys and the island of keys where extra keyboard functions reside, it’s also narrower, and shorter to boot. In fact, it’s so tiny, I can fit it in a small, everyday sling bag! If you’ve ever dreamt of a truly portable mechanical keyboard, this is what you should be looking at.

For gaming, the shallow travel and very low actuation force necessary makes for fast, easy pressing, perfect for fast-paced gameplay. Typing is likewise pleasant due to the smooth response and again, the shallow actuation.

I do have some issues with it though. Since it’s a pint-sized keyboard, the layout can be a problem sometimes. The location of the “shift” key for one is placed oddly versus a full-sized one. More than once you’ll end up hitting the “up” key instead. It takes some getting used to, but is not insurmountable. Battery life on Bluetooth mode is enough for several days of use, and since it charges while in wired mode, you’ll likely never really have to worry about it dying on you.

This keyboard can be had for about PHP 3,000, which is not bad for a mechanical keyboard. On top of that, you get RGB lighting, wireless connectivity, and a practically portable size. It’s incredible value.

Whether it’s gaming on the go, or wired and at your desk, this is a great keyboard for the price.