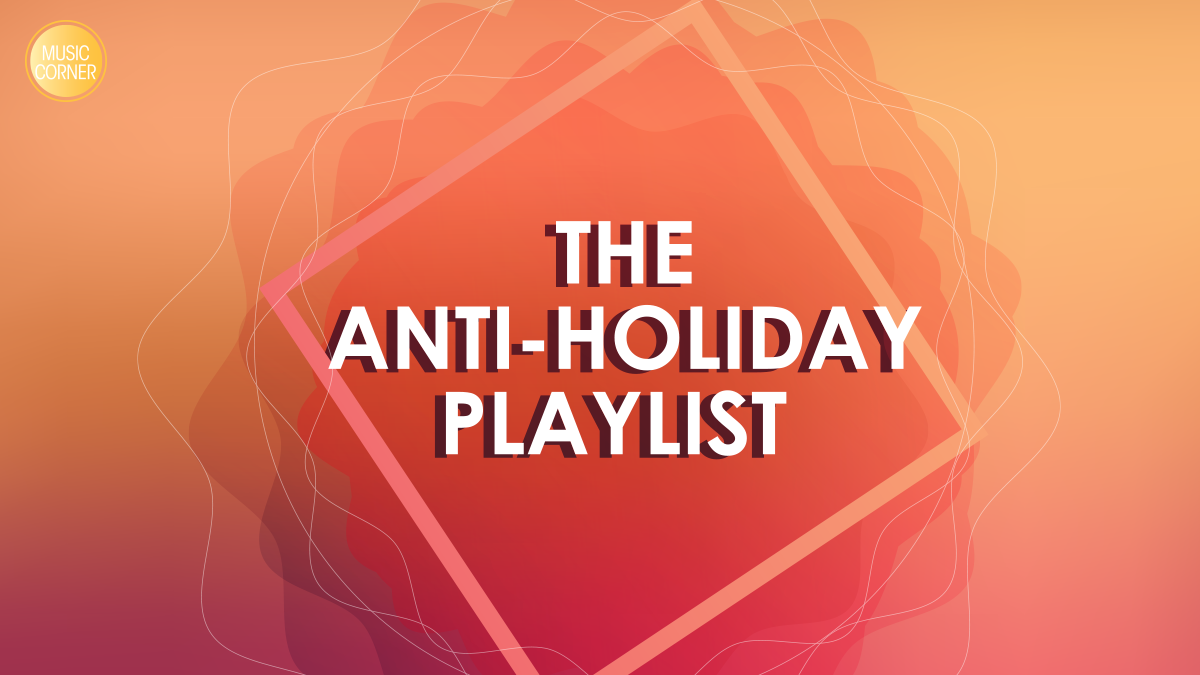 If you’re reading this from literally anywhere in the Philippines with a mall, that means you’ve been hearing Christmas music for several months now. Jose Mari Chan has once again made his way into every waking moment, and while that’s great for the memes, it’s not the best thing for our sanity. We’re here to try and make things better. Here, for your consideration, is an Anti-holiday playlist, guaranteed to leech all the happiness and good cheer from your heart. That’s not necessarily a bad thing, mind. It’s all about balance. So if you’re all Christmassed out, queue this bad boy up and get back to your normal, melancholic self.

You’re not going to find this track on Spotify, so you’re going to have to head over to YouTube to try and get a hit. It’s a recording of a Fiona Apple performance of an iconic Chrstmas blues song, and is dripping with the longing and heartache that can only come from missing someone during the most wonderful time of the year. By this point in your life, dear reader, I’m almost certain you’ve experienced this kind of yearning, so Fiona’s emotional rendition of an already sad song is certain to hit home. For maximum effect, listen to it sitting by a window facing an empty street.

No Doubt remains one of the biggest Ska bands to have ever broken into the mainstream, and for good reason. While this is a Christmas song, and does have tones of good cheer, you can completely overlook that and just run with the awesome ska sound that has been woefully absent from the airwaves for far too long. Steffani’s distinct vocals, coupled with that heavy Ska brass is a great distraction from all the sterile, hot cocoa and sweater music that we’re all accustomed to hearing this time of year.

Beck is a rare musical genius, and we are lucky to have experienced his music in our lifetime. Another ‘90s track that dropped after the breakout success of Odelay, this is a tour-de-force of his visionary talent. This seven-minute masterpiece was ahead of its time, and holds its own even today. While holiday robot funk isn’t a genre itself yet, this is destined to be its anthem. With fat 808 beats, and a very Flight of the Conchords vibe, it’s definitely worth a playthrough at the next family gathering, if only to confuse the oldies.

If you’re a fan of Scrubs, this is something that’s right up your alley. The chemistry between Braff and Faison is at its peak here, and they let it shine through what might be the most covered contemporary holiday track out there. The tune is the same, though it quickly turns into a comedy skit that’s actually reasonably funny. Even if the humor isn’t your cup of tea, watching will at least stick it to the innumerable covers of a song that’s surprisingly unsettling once you think about what’s actually going on.

While it might be strange to include a track from a Christmas album in a list of anti-holiday songs, this isn’t one we can pass up. Ave Maria, the Schubert classic, is given new life by Chris Cornell. Chris doesn’t bring out his signature wail out in this track, but it’s heavily alt Rock, and unmistakably Cornell. It’s a soulful take on the song, but made all the sadder by the rock legend’s passing in 2017. There’s not a lot more to say about this track, but find it online, and listen to it quietly, relishing the voice of an icon gone by.

Strangely heartwarming in a drunk, Irish sort of way, this is a quintessential Christmas track that you’re not likely to find in any sanitized album of carols. It reads like a tumultuous relationship that’s still actually kind of sweet. Though The Pogues actually recorded months before Christmas rolled around, it’s still a great listen if you regard the lyrics closely, admire the instrumental work, and imagine you’re in a New York sidestreet, sharing a cigarette with a fellow holiday dodger.

While superb at both, Dave Matthews is neither the best guitarist, nor the most talented vocalist. His lyrics are second to none. While it’s not exactly a Christmas song, as the title might lead you to think, it’s a song about a great guy, and the great things he did. Regardless of what you think about the season, or even about religion, this is a song that is just so feel-good it’ll tame any Scrooge. Head over to YouTube and find Dave’s 2009
performance at Las Vegas where he shares the stage with guitar virtuoso Tim Reynolds—this is one of the best versions of the song.

The Christmas season can be stressful, the music can be overbearing, and the constant good cheer maddening, but we hope these tracks can give you a little break from all the revelry, and find your space.