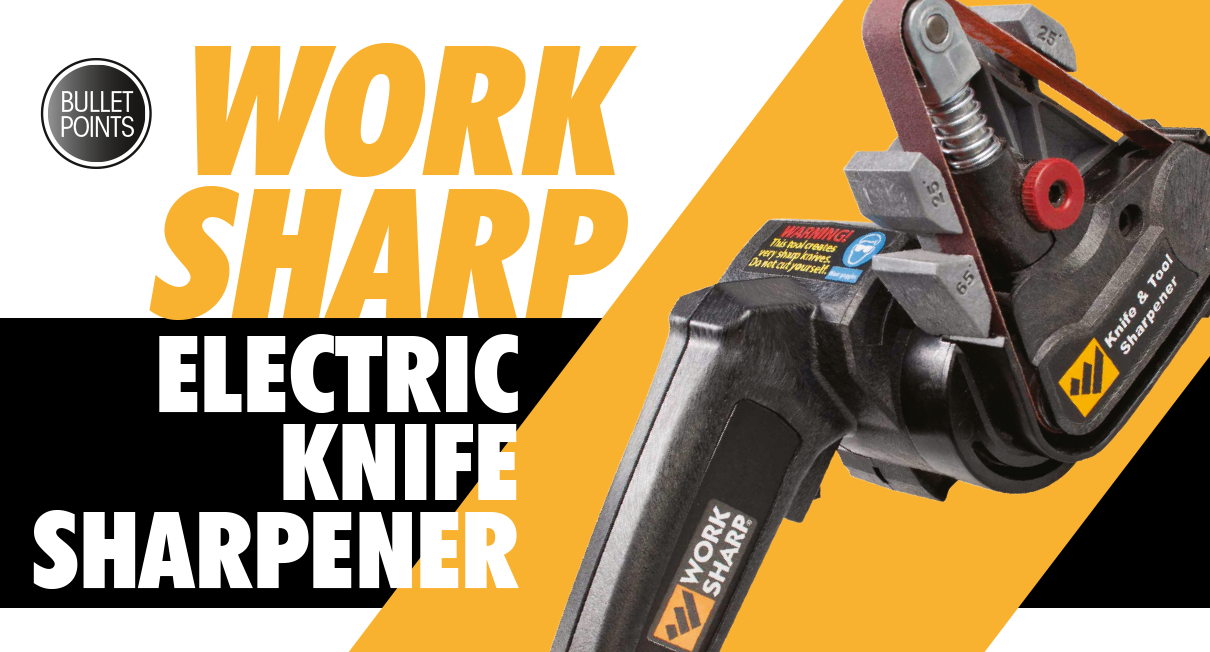 Electric knife sharpeners are really helpful, and can do a lot to cut work time down to a fraction of what it would be working freehand. It can also be a quick way to wreck a perfectly good knife. However, if like myself, you are the go-to guy several groups of friends go to for knife sharpening, I can’t express how much more convenient it is. The key is experience, and the correct kind of sharpener.

After sharpening with a clamp and angle guide system for many years and wearing down a few sets of stones, I decided I wanted something that would work a little faster. My search led me to the Work Sharp sharpener. It’s a slack belt electric sharpener that comes with an angle guide for consistent results. It’s a serious piece of kit, and something that you’ll have to learn to use, but as with anything serious, used properly, it really does deliver. 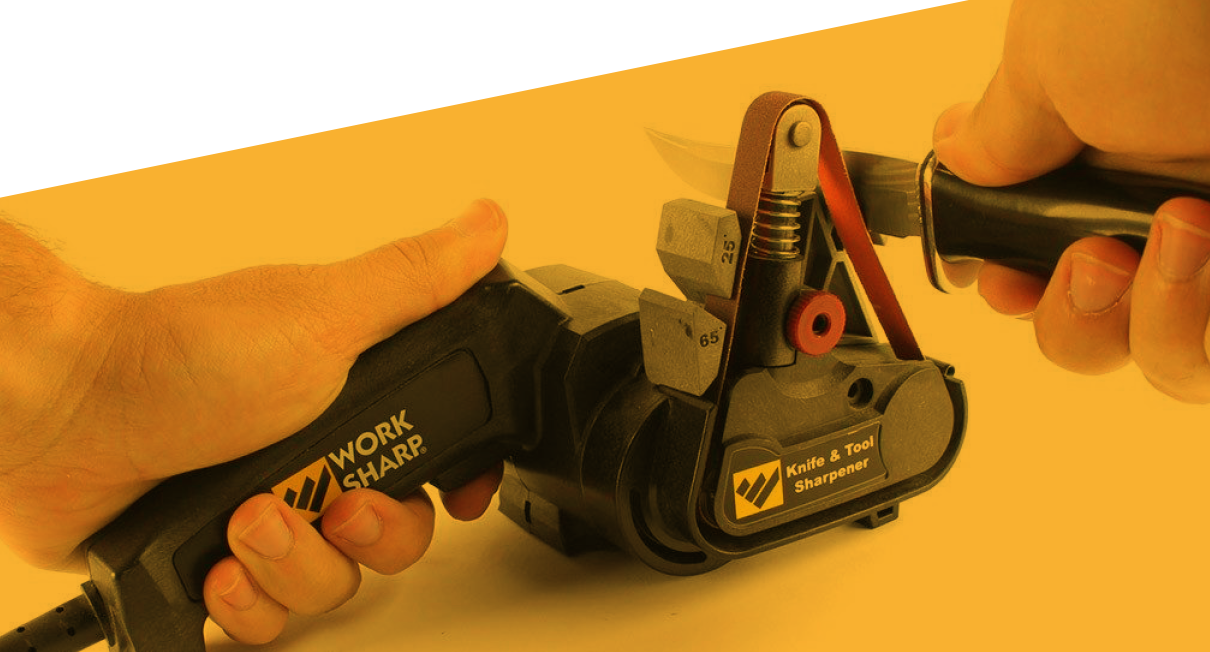 The basic kit comes with the device, a manual, an instructional DVD, and sanding belts of different grits. If you’re wondering how the thing works, imagine a slack belt sander whose belt is about half an inch wide and you’ve got it. To sharpen the knife, you pass the edge through the angle guide, putting the blade against the 15,000 RPM belt to grind off material. The process is repeated on the other side, then the belts are changed to progressively finer grits until the final polish is achieved.

On paper, it’s simple. In practice, it actually isn’t too hard either. Setup is dead easy. Loop the belt over the rollers, snap the angle guide on, and get sharpening. You can go from setup to a scary sharp blade in about 10 minutes, which is an extremely tempting proposition.

But here’s a catch: the system is so effective that you can just as easily ruin a knife, particularly those with softer steels, in less time than it takes to put the thing together. Too much or too little pressure, an inconsistent angle, or too much time on a particular spot will easily wreck your knife.
The only thing makes this tool effective is experience. You can get that from learning how to sharpen with any of the other conventional methods, and translating that to the Work Sharp, or to go through a few knives that you’re actually willing to make mistakes on, because you will make mistakes learning to harness the device’s capabilities.

Of particular difficulty for me at the start was sharpening through to the tip of the blade, where there is no further support to keep the knife in place. The belt can carry it away, grind at the wrong angle, or ruin the blade finish. This is something I had to figure out over a few sessions, and is not too hard if you know what you’re doing.

Another concern is if you have a blade with a satin finish. Riding the knife along the angle guide can mar the finish, so you’ll have to protect areas of contact. Also bear in mind that being a slack belt, this will necessarily convex the blade’s edge. That’s not to say that there’s anything wrong with having a convex grind on your blade, in fact there are some real benefits to it, but if you’re concerned with changing edge profiles, this is something you’ll have to keep in mind.
All that being said, the way I use the Work Sharp is a little peculiar. I’ve taken to using the Work Sharp to change the blade angle to 25 degrees on a side (so that’s a 50-degree angle, taking into account both sides—so that’s the 50-degree slots on the angle guide), and then take it to either my clamp and angle guide sharpener or the crock sticks for a really fine edge. Changing the angle manually with stones is a royal pain, and takes forever. This does it in less than ten passes on each side. It’s amazing. Other blades that require a quick sharpening also benefit from this, though I have to admit that I need a little more experience with it to get it as sharp as I can with a manual sharpening. 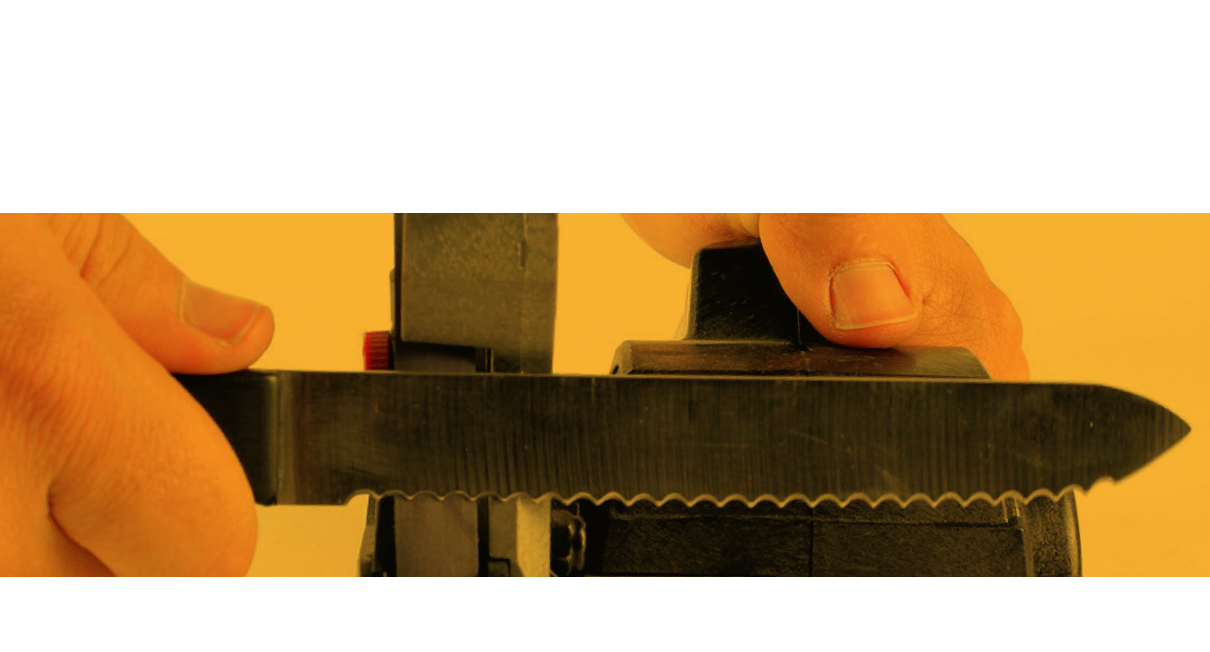 What can I say about the Work Sharp system then? My opinion is twofold. It’s amazing in that it cuts work time to a fraction of what it would normally be. On the other hand, a person who doesn’t know what their doing will find themselves with oddly shaped, possibly blunt knives. If you’re willing to go through the learning process, this is the best friend a knife guy or gal can have.