Climate Action 2023: How tech and mobility can help

6 Jan 2023
LifestyleGreenClimate Action 2023: How tech and mobility can help 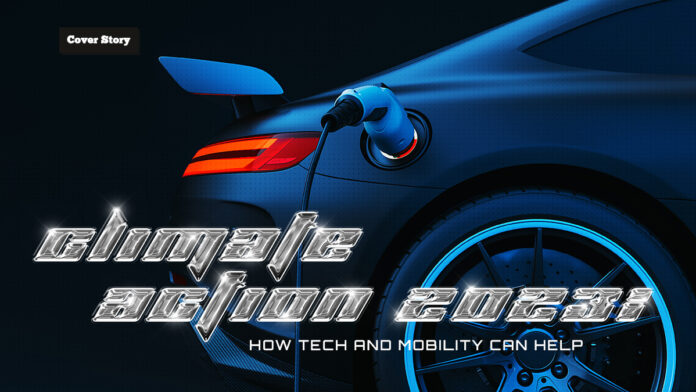 2015 saw the signing of the Paris Agreement, a legally binding international agreement on climate action that seeks to limit global warming to below 2°C, ideally to 1.5°C, compared to pre-industrial levels or the time before machines, factories, vehicles, and most other conveniences of life today.

The year the treaty was signed, the world had already reached the 1°C global warming mark. In 2020, the world was already at 1.2°C of warming. Unless greenhouse gas emissions — carbon dioxide, methane, nitrous oxide, and other gases that are byproducts of production, consumption, energy, and electricity use — peak by mid-decade and are halved by 2030, the world has no chance of meeting the ultimate goal of the Paris Agreement.

The numbers may seem minuscule, but the effect is indisputable. Just like how your body feels fine at 37°C but is miserable at 38°C, so is climate change’s effect on Earth and our lives. Glaciers are melting; sea levels are rising; floods have become more common; droughts and heatwaves have gotten hotter; corals are dying; fish stocks and agricultural outputs are reduced; more animal and plant species are being endangered; typhoons have gotten stronger; and many other hazards are arising from our steadily-warming planet.

Just look at the past few years with Category 4 or higher typhoons such as Ulysses, Rolly, Odette, and Karding, and compare that to typhoons a decade ago, and you’ll see that climate change is indeed real, is here, and is getting worse.

But have hope: the growth of greenhouse gas emissions has slowed down. Better yet, the world of technology and mobility has plenty to offer in this fight against climate change.

With the almost yearly release of new phones, tablets, and computers, as well as the trend of upgrading appliances to more energy-efficient ones, it is no surprise that electronic waste has become the world’s fastest-growing waste segment. This problem is further compounded as more and more electronics become obsolete or broken, and then subsequently discarded. In fact, during the first decade of the millennium, e-waste rose from 20-million to 50-million tonnes each year, or the equivalent of almost 5,000 Eiffel Towers. By 2050, it is expected to grow to over 110-million tonnes per year. In the Philippines, 3.9kg of e-waste per capita was generated in 2019 for a total of over 420,000 tons.

There are several adverse effects of e-waste. First, it is a major source of pollution. Many electronic devices contain hazardous materials, such as lead, mercury, and arsenic, which can leach into the soil and water if not disposed of properly. In addition, e-wastes can release greenhouse gases, such as carbon dioxide and methane, when incinerated or left to decompose in landfills.

Second and related to the first point, e-waste can negatively impact human health. The hazardous materials in e-waste can harm people who come into contact with them, either through direct contact with the waste or through the air, water, or soil. For example, lead and mercury leached into water sources can damage the nervous system, and arsenic can cause cancer.

Lastly, e-waste can contribute to the depletion of natural resources. Many electronic devices contain valuable materials, such as metals, plastics, and glass, which can be recovered and used again through recycling. However, if e-waste is not recycled, these materials are lost and must be replaced with new, virgin materials, which can be costly and environmentally damaging. Just imagine the amount of gas-guzzling trucks, deforested lands, and other environmental costs to mine all-new copper, aluminum, nickel, or gold.

Despite the importance of better managing e-wastes, only a tiny fraction of e-waste is recycled correctly. The United Nations estimates that only 17.4% of global e-waste was recycled in 2019. This 2023, the International Telecommunication Union (ITU) is targeting to increase the global e-waste recycling rate to 30%.

To meet this target, it is essential for governments, businesses, and individuals to take action. This can include more vigorous promotion of proper e-waste disposal, increasing awareness about the hazards of e-waste, and investing in infrastructure to support e-waste recycling. By working together, we can reduce the negative impact of e-waste on the environment and protect the health and well-being of people worldwide.

The transition to electric vehicles has begun

Electronic vehicles, also known as EVs, are becoming an increasingly popular alternative to traditional gasoline- and even human-powered modes of transport. During the past decade, the Philippines had 12,965 EVs registered with the Land Transportation Office, including e-trikes, e-motorcycles, e-jeepneys, e-buses, and e-cars.

One of the most significant advantages of EVs is their lower operating costs. Because they are powered by electricity rather than gasoline, EVs are much cheaper to operate on a per-kilometer basis. This is because electricity is generally less expensive than fuel (especially with today’s pump prices) and because EVs are more efficient at directly using energy to get the vehicle moving. As a result, EV owners can save a significant amount of money on fuel costs over the life of their cars.

Another advantage of EVs is their improved performance. Because they have no engine or transmission, EVs can accelerate quickly and smoothly. This makes them ideal for city driving, where stop-and-go traffic is common. EVs are much quieter than traditional vehicles, making for a more pleasant driving experience.

In addition to these benefits, EVs have a much lower environmental impact than traditional vehicles. Because they produce no tailpipe emissions, EVs do not contribute to air pollution or greenhouse gas emissions. This makes them an attractive option for people concerned about the environment and who want to reduce their carbon footprint.

In addition to EVs, there are also several other modes of electric transport that are gaining popularity, such as electric motorcycles, electric bicycles, and electric scooters. Electric motorcycles offer the same benefits as four-wheeled EVs. Electric bikes and electric scooters are also becoming increasingly popular, particularly in congested urban areas, where they offer a convenient, environmentally-friendly, and less-sweaty way to get around through traffic and over sidewalks. Parking for these two electric two-wheelers also tends to be free, making the cost of ownership even lower.

With the steady growth of the necessary charging infrastructure across gas stations, malls, car dealerships, and other key points around the Metro, it is clear that electric transport is becoming an increasingly important part of the local transportation landscape. As more people become aware of the benefits EVs bring, and as the cost of acquisition and ownership becomes lower, the demand for EVs will likely continue to grow in 2023.

In conclusion, the proper management of electronic waste is crucial for mitigating the negative impact of technology on the environment. Not only does it prevent harmful chemicals and materials from entering the land, air, and water, but it also allows valuable resources to be recovered and recycled. Furthermore, the adoption of electric vehicles is a crucial step in further reducing greenhouse gas emissions and air pollution. By making these environmentally-conscious choices, individuals and communities can play a vital role in limiting global warming and the destructive efforts of climate change in 2023 and beyond.

Epson releases data on climate change perception in the PH