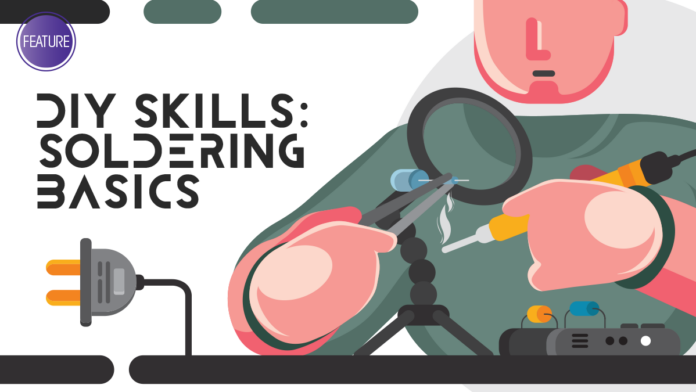 In a world that sees new tech hit the market daily, soldering is one of the most basic and useful DIY skills anyone can pick up. If your only experience with soldering is seeing a villain on TV solder wires to make a bomb, don’t fret! It’s easier in real life, with very little chance of blowing yourself up.

You’re going to need a soldering iron, if that isn’t already obvious. There are a lot out there, and there are a few things to consider when you start out. First, cheap irons without temperature control (plug-and-pray) will work, but can be quite frustrating to use, as they tend to run a little too hot. There are reasonably inexpensive ones with at least an attempt to have temperature regulation, so you might as well give yourself a break and start with one of those. Oh, and yes, go electric. Leave the gas ones for those who need a portable option (there are fine portable ones like the TS-80, which I highly recommend if that’s what you need). You have a more than decent chance you might ruin your first iron’s tip while learning, so bear that in mind, and don’t get too attached.

An important thing to note is that a lot of the time, these cheap AC irons aren’t isolated, so bear that in mind before working on sensitive components where this might be a problem.

Next, you’ll want a heat-resistant surface to work on. There are pads available online for that, but a stone surface should work fine. Soldering will cause globs of molten solder to drip onto your surface, so plastic isn’t the best idea. Wood surfaces won’t immediately burst into flame, but you’ll definitely mar the surface, and the fact that wood is easily combustible doesn’t help its case. I’ve also used a large floor tile as a movable soldering surface, but you can get creative with what you have.

You’ll also need a damp sponge to clean the tip on your iron, and if you want to get fancy, a ball of copper wool for more aggressive cleaning when it inevitably gets gunked up.

There are also a few consumables you’ll need. Some good-quality, rosin-core solder is essential. The brand usually comes down to personal preference, so shop around and give some a try. Also find a thickness that’s appropriate to the soldering job you’ll be attempting. Solder that’s generally available from the closest hardware store is a good place to start, and if you’re soldering anything thicker than electrical mains cable, or smaller than the inside wires of a headphone cable, you probably already know what you’re doing and don’t need to read this article. You’ll also need flux paste both for preparing your iron, and general soldering. Make sure you avoid plumber’s solder and flux—those aren’t for electrical use, obvs. A set of helping hands (alligator clips on the ends of flexible arms) are also immensely useful if you need to solder anything other than through-hole components.

The best way to learn is to just get on with it. Get some old electronics, and solder stuff on. I started by replacing switches with my old mechanical claw controller, but anything that has long, wiry legs that go all the way through the board should be a good place to start.

Before you get started, it is IMPERATIVE that you tin the tip of the iron. This is meant to keep the tip from oxidizing. An oxidized tip won’t let solder stick to it, and won’t transfer heat well, which will lead you into a frustrating spiral of frustration that will probably make the tip oxidize even more. There are some ways to do this. My personal, absolutely overkill way to do this is to wrap the tip of the soldering iron in solder, and then plug it to bring it up to temperature. The solder starts to melt well before the tip can oxidize, so the molten solder will coat the tip, keeping it shielded from oxygen, thereby saving it from pitting, and the dreaded black death. Once the solder melts, give it a tap on your soldering stand, a gentle wipe on the daamp sponge, and dip the tip in some soldering paste. Then, melt some more solder on to the tip (no need to re-wrap, just melt the wire on end-first) to make sure you’ve not left any gaps, tap off any excess solder once more, and you’ll be ready! You’ll know you did it well if the tip of the soldering iron is coated with a layer of solder, leaving it nice and shiny. You can now set that down.

Once that’s done, you can finally solder on! Take the component you want to install, stick the legs through the holes in the board, and flip the board over so the legs are pointing up. Now, pick your iron up, apply a little solder on the tip (this helps it transfer heat to the component and pad better), and touch that to the pad and base of the component’s leg. Give it a quick beat for the leg and pad to come up to temp, and touch the solder wire onto the pad and leg, feeding it in as it melts around the base. Take the soldering wire away, followed by the soldering iron, and you’re done with that leg! Before moving on, give your iron a wipe on the damp sponge, add another touch of solder to the tip, and repeat the soldering process on the other leg. Don’t melt solder on the iron, and drip the molten solder onto the joint. Heat the joint, and melt the solder there. When it’s time to set the soldering iron down, don’t wipe it off, otherwise it will sit in the stand without any solder protecting it from oxidation. Just give it a wipe before soldering another component for best results.

You’ll know you have a good joint when it looks like a nice, shiny, even, tin volcano rising up along the leg. If it looks like there’s a blob of solder on the joint, you might not have made a solid connection around the leg, which might lead to intermittent problems later on—and those are the worst kinds of problems to troubleshoot. No bueno, Also it’s good practice to wipe the joint clean with alcohol after, just to keep things neat.

Soldering wires together is just as simple, with a little extra trick to make things go smoother—tinning the wires. First, strip the insulation of the wires. Then dip the raw wires into the flux paste. After that, apply a touch of solder to your iron, touch the raw wire with the tip to heat it up, and touch some solder to the exposed wire. Do the same to the wire you’re connecting. Once both wire ends are tinned, you can touch the two together (helping hands work great here), touch the iron to the tinned wires, and touch some solder on to those once they’ve heated a bit. Move the solder away, then move the iron away, and you’re done! GG EZ.

It’s quite straightforward, but there are a few bumps you may hit along the way. If the solder refuses to stick to the tip of your iron, that means it sat hot and untinned too long. It’s oxidized and that oxide layer is keeping the solder from wetting the tip. You won’t be able to get anything done in that state, so hit it with some flux paste, scrub it on the wet sponge or copper wool.

If the solder joint isn’t a nice smooth volcano shape, the components might not have gotten hot enough, either because there wasn’t any solder on the tip of your iron to transmit heat, or you heat the joint well enough before touching the solder wire onto it. Heat it again, hit it with a solder pump, and redo.

If the component starts turning black, it may be that your iron is too hot, and/or you’re leaving it on too long (or it might just be the burnt rosin, but that’ll come off with alcohol). That might wreck your board or component, so be careful not to let it get to that point.

If you’re trying to solder wires together, and the solder won’t stick to the wires, make sure your soldering iron isn’t oxidized, make sure the wire isn’t dull and oxidized, tin your tip, flux the wire and tin that, and retry.

Soldering is a very handy skill to have. It opens up a whole world of fixing and tinkering that would otherwise be inaccessible. As with any skill though, it takes practice and patience to get right. Just keep at it, and your efforts will be rewarded.