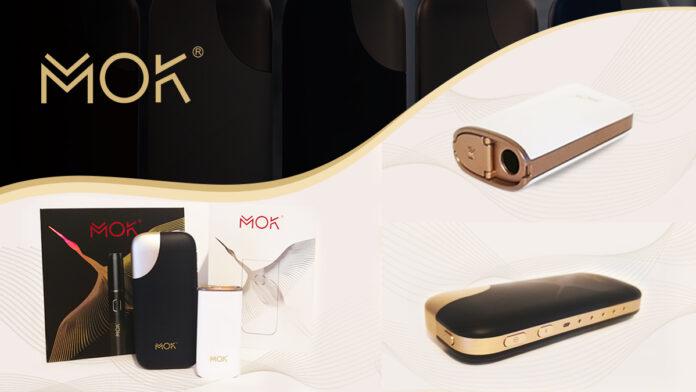 Cigarette smoking has gotten a bad rap over the past decades—and for good reason. Burning tobacco produces hazardous substances such as tar and carbon monoxide that make their way into the human body. Discerning smokers have been looking for a better alternative that is as satisfying as smoking traditional cigarettes.

Technology has come up with an answer. MOK, a revolutionary heat-not-burn (HNB) device, uses sophisticated electronics that heat up specially designed tobacco sticks, instead of burning them as you would with a traditional cigarette.

Without the hazards of burning tobacco, HNB opens up a world of new possibilities for smokers who seek to improve the status quo. MOK uses this modern technology to produce flavorful and nicotine-filled vapor instead of smoke.

The heat source is the main difference between traditional cigarette smoking and HNB. Why is the absence of smoke important? Burning tobacco creates the majority of the harmful chemicals from cigarette smoking. Heating tobacco on the other hand, generates vapor, which contains significantly less toxins than smoke.

MOK’s HNB technology is called the MOK HeatMaster System. It uses a pin that heats the tobacco stick from within, just enough to release nicotine in vapor form. Without smoke, MOK offers adult smokers an equally satisfying experience with reduced risks.

MOK also does not produce ash. The absence of smoke and ash makes MOK friendlier to the environment, and more convenient for the user.

Using MOK spares other people from the hazards and unpleasantness of traditional cigarette smoking, too. Around MOK users, other people are less exposed to second-hand smoke and the smell of burning tobacco.

Although MOK delivers vapor, the tobacco sticks that MOK uses contain real tobacco leaves. This is key in creating a smoking experience closer to traditional cigarettes than e-cigarettes, vaping, and other alternatives that use liquefied nicotine.

MOK has two HNB models in the Philippines: MOK and MOK mini.

MOK is a split device composed of a pocket charger and a holder. At full charge, the pocket charger can power the holder for up to 20 heating cycles. The holder takes 4 minutes to charge. When the heating button on the holder is pressed until it vibrates, the 15-second pre-heating begins.

MOK features two operational modes. Single mode provides one 5-minute heating cycle. After every cycle, the holder needs to be charged before it can be used again with a new tobacco stick. Double mode, on a single charge, allows for two consecutive but shorter heating cycles at 3 minutes and 30 seconds each.

MOK mini, on the other hand, is an all-in-one device. Standing at only 2.7 inches, MOK mini is sleek, compact, and handy. At full charge, it carries out 12 consecutive heating cycles at 4 minutes and 10 seconds each. The lights surrounding the touch button indicate the battery level.

Both the MOK and MOK mini need to be cleaned using the MOK brush included in every box. Aside from the MOK brush, the MOK split device comes with MOK cleaning sticks specially designed to clean the holder.

MOK can be enjoyed with COO heat-not-burn sticks and vice versa. In the Philippines, COO is available in three flavors: Golden Hue, Blue Hue, and New Wave.

Smokers looking for the classic tobacco taste would enjoy Golden Hue’s balanced flavor. Blue Hue offers a fresh and cool flavor for smokers who prefer the taste of menthol. The minty New Wave Capsule adds a sweet surprise for those who may want variety in their tobacco experience.

Until recently, it seemed as if a less harmful and satisfying way of enjoying tobacco could not be invented. MOK shows that advances in science and technology can be used to provide a better alternative to an archaic habit such as smoking traditional cigarettes by way of burning tobacco.

Article and photos by Zel Zalamea