Electrifying Sustainability: The case for EVs 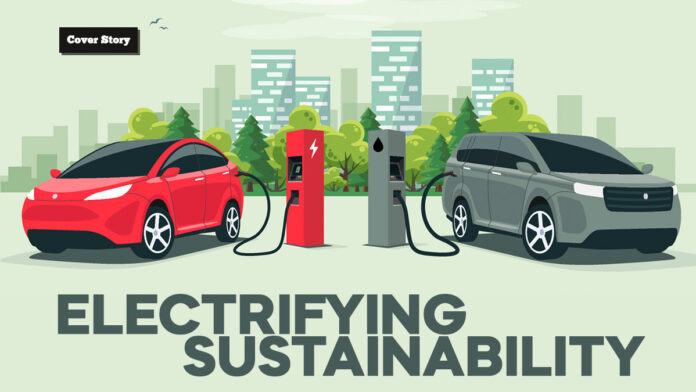 Electric Vehicles (EVs) have recently become a topic in people’s conversations. The rising gas prices have made many, including Filipino motorists, drool over EVs and how much they’ll save by not gassing up.

Apart from gasoline savings, EVs have risen in popularity over the last couple of years as more and more nations commit to a greener future. As EVs produce no emissions, many nations have given EV owners more incentives to choose a greener commute over the traditional combustion engine.

With the global impact of climate change, EVs are seen as a greener alternative to combustion engines. The EVs’ lack of carbon emission is the main argument for their adoption to fight climate change.

But there is also a question of how green an EV is.

Most EVs in the market utilize lithium-ion batteries which, by themselves, utilize a significant amount of energy to produce. According to studies, the production of lithium-ion batteries alone constitutes a large part of an EV’s total production carbon footprint, producing emissions as high as 73kg CO2-equivalent per kWh. There’s also the use of cobalt, nickel, manganese, and other rare earth elements the very mining of which significantly damages the earth.

There’s also the issue of charging the car. A vast majority of the world still relies on fossil fuels and coal to power its electricity grid. This is by far a larger contributor to climate change than a single combustion engine, right?

However, if you are fortunate to be in a country that is shifting to renewable energy, then EVs could be much greener compared to countries solely reliant on traditional energy sources.

As for the battery issue, technological advancements in battery recycling present viable solutions for EV batteries living out their automotive lifespans. These “dead” batteries can be resurrected and repurposed to power other devices, or as storage for solar or wind generators.

The case of adopting EVs as an environmental solution has been bolstered in many countries. Great Britain and France give motorists cash incentives when they purchase a purely electric vehicle, while Norway, the US, and our neighbor Singapore give tax cuts to EV owners. These incentives have allowed EV prices to be competitive with their petrol rivals, giving motorists the option to go
green without losing too many dollar greens.

Incentives are one way to encourage motorists to shift to electric, but other nations are pushing it one step further. There are now dozens of countries promising to shift to net-zero, or go carbon neutral. One of the drastic means these countries are adopting to achieve net-zero is by slowly phasing out internal combustion engines. As early as 2030, countries like Denmark and the Netherlands will totally ban internal combustion vehicles.

How the Philippines is joining the electric revolution

While the rest of the world enjoys EVs, the Philippines has a bit of catching up to do. Car manufacturers like Nissan, Volvo, Audi, and Hyundai have only recently introduced EV models to the local market. There’s also a glaring lack of infrastructure catering to EVs, especially roadside charging stations.

All that will change with the recent passage of RA 11697 or the Electric Vehicle Industry Development Act, the country’s first EV law, which aims to lay the foundation and infrastructure for EVs in the Philippines.

The law offers incentives for owning an EV, like lower tariffs during importation, priority for LTO registration, and exemption from the coding scheme. As for fiscal incentives, although the law includes the lifting of tariffs for EVs, Plug-in Hybrid EVs, and HEVs, these models will still be subject to excise tax under the TRAIN Law. Whether or not an EV can compete with the pricing of the traditional petrol car is still unsure.

Despite the uncertainty of prices, the law is a start. In fact, certain provisions actually mandate the use of EVs in government fleets, as well as the construction of EV-dedicated parking with chargers in certain establishments. This small infrastructure and logistical accommodation is a great start for the country that is behind in EV infrastructure.

Rather than driving, how about riding

On another note, sustainable commuting does not have to be on a four-wheeler. There’s also a good case for why we should look at electric personal mobility vehicles to ferry us to our destinations.

Apart from EVs, electric motorcycles have also become a topic of interest. China and Europe have already embraced the arrival of these electrified motorcycles, while Southeast Asian nations are slowly opening their roads to them.

There are also personal mobility devices like electric bikes and electric scooters. These gained popularity during the pandemic, with many blue-collar workers opting to ride a bike to work following the government order to suspend public transport.

As the train and bus system is limited to the main thoroughfares, the lack of Jeepneys and tricycles during the height of the pandemic induced many of our countrymen to go for alternative transportation. AS mentioned earlier, many opted for a bike, mainly due to its affordability.

The increase in the riding population brought to light many concerns. Many of our roads are not suitable for bikes and other personal transportation. In fact, prior to 2020, EDSA, the country’s main highway, didn’t have infrastructure on the entire length for the riding public. Thankfully, government agencies are now taking action.

The pandemic saw the Metropolitan Manila Development Authority (MMDA) marking out a dedicated biking lane on EDSA. Metro Manila constituent cities followed suit by also establishing bike routes and lanes through their territories. Additionally, the Senate and Congress both have pending bills establishing pathways for personal mobility vehicles like bicycles, and mandating infrastructure to cater to the riding public.

Why go less to gain more

A major reason why the bicycles and other electric personal mobility vehicles should be in the conversation is their role in helping decongest the country’s highways. Their emissions are considerably lower as well since you’re charging a smaller battery.

Ebikes, the literal electronic bikes, are also good for your health. They’re a form of exercise by themselves with riders still needing to pedal some of the way.

But even if we instantly shift to electric right now, it won’t be an instant solution to our environmental and commuting crisis. There is still a need for a more efficient mass transit system that caters to all classes.

As people slowly regain the normalcy of pre-pandemic times, the cracks in the lack of efficient mass transport are slowly beginning to show once again with commuters and motorists battling in the little space we have.

Mistakes to avoid when buying a car insurance