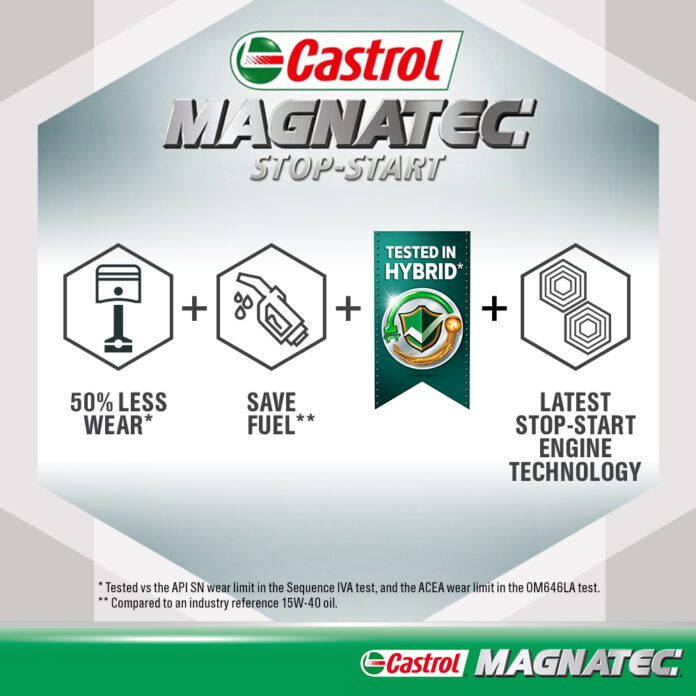 Whether it’s for work, travel or the family, personal cars play a crucial role for many Filipinos as it enables the mobility they need to best provide for themselves and their loved ones.

The heavy reliance on personal cars however, makes them more vulnerable to engine damage due to the increased stress from traffic and the wear and tear from regular use. Castrol MAGNATEC with breakthrough DUALOCK Technology is engineered for the task, providing car owners with non-stop engine protection for a variety of vehicles and fuel types—both while running and at rest.

During engine stop or rest, the oil cools down and drains to the sump. When the engine starts up, where nearly 75% of engine wear occurs, it takes approximately 20-minutes for it to reach optimal engine temperature. At the same time, critical engine components are lacking oil and are most vulnerable to damage. Combine this with the common issue of traffic, it causes drivers to experience more stop-start driving, and you have an engine that faces up to 66% in added stress on critical components from extended periods of idling.

With the overwhelming challenges that drivers and their car engines face, Castrol MAGNATEC with industry leading DUALOCK Technology equips today’s Filipino with complete engine protection throughout the driving process, from running until the time it stops – drastically reducing damage from both warm up and stop-start wear by up to 50%. It is available in three variations, Castrol MAGNATEC STOP-START, Castrol MAGNATEC, and Castrol MAGNATEC Diesel.

“Castrol MAGNATEC is designed to protect the everyday Filipino driver, ensuring that their engines are at peak performance at all times. This is especially relevant with today’s uncertainty brought by the pandemic, as complete protection and reliability gives them the much needed confidence to conquer the challenges that lay ahead,” said Maria Tañada, Castrol Philippines country sales director.

Castrol MAGNATEC Diesel is recommended for Diesel engines, and uses synthetic technology (Semi-synthetic) with a 15W-40 viscosity. It comes in 1-liter and 5-liter packs, and is suitable for vehicles including Toyota Fortuner, Toyota Hiace, Toyota Hilux, Toyota Innova, Toyota Land Cruiser, and Mazda BT-50.
Castrol MAGNATEC with DUALOCK Technology is engineered with an industry-first pioneering formulation, resulting from ten years of research and development to create a lubricant suited for today’s urban driving environment and to protect engines against the wear caused by stop-start driving. Castrol MAGNATEC’s DUALOCK Technology combines the new STOP-START wear molecules with Castrol MAGNATEC’s original intelligent molecules to improve wear protection. They lock together to form a powerful force-field of protection on vital engine components, resulting in a 50%* reduction in wear and tear from engine warm-up and stop-start driving, even for vehicles running on the latest stop-start technology.

End the year with a P365k discount on the Jeep Compass!

For the mileage we’ve been through this year, Jeep Philippines is giving out up to PHP 365,000 discount on the Jeep Compass this December....
Read more

The Manila International Auto Show remains to be the most anticipated motoring and driving event in the country. MIAS consistently gathers more than...
Read more