Netherlands is famous for its windmills and canals—both are must-sees. Many of the places outside of Amsterdam though having authentic windmills and houses are actually new developments designed for tourism. Many of the buildings have been relocated from other places to create the arts and crafts villages.

Giethoorn, on the other hand, is the real thing. It is a quaint but very picturesque little village 120 kilometers northeast of Amsterdam. Established in the 13th Century as a mainly farming community, the village got its name after the great number of goat horns that were found in the surrounding fields, believed to be horns of wild goats that drowned in the flood of 1170.

The town is often referred to as “Little Venice” or “Venice of Netherlands” because the only way to go around is through the maze of canals and the pedestrian paths and footbridges. Canals were created and dug by villagers to extract peat for fuel; all were filled by rain water to form shallow lakes and ponds. Eventually, the interconnected canals became the most convenient way for people to move around and carry goods from one place to another.

Getting to Giethoorn is a one-and-a-half hour drive from Amsterdam. A perfect place to visit for the day if you want to do something uniquely Dutch without contending with the crowds, it is a good place to visit on a weekday when there are fewer visitors.

Visiting Giethoorn feels like you’re in a theme park, but it is an authentic working canal village with a small community of 2,620 permanent residents who live there all year round. But because it is becoming more popular with tourists, some of the houses have been turned into small bed and breakfast places or rental properties. There are several souvenir shops and restaurants that cater to the visiting public, too.

It is a purely pedestrian community – there are no roads within the village and even residents have to park their vehicles at the private parking lot at the entrance of the village. There is also a public parking lot where visitors can park for a fee.

The main attraction is the village itself. The beautiful thatched-roof houses and the establishments in the village can be accessed by way of the footpaths and footbridges that crisscross the narrow canals. Many of the properties are surrounded by well-kept gardens. 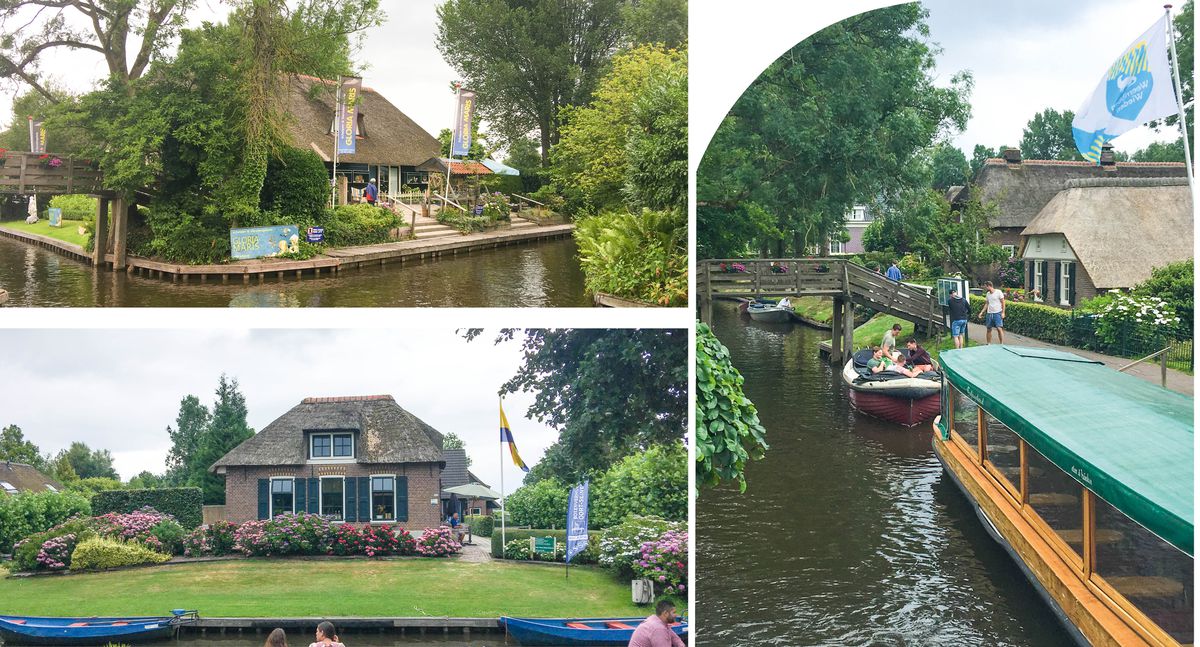 The best way to explore a wider area of the village is by renting an electric canal boat. Small canal boats that can carry up to four passengers comfortably are available for rent at €20 for an hour.

The boat rental guy gives a short orientation on how to navigate the canals and what color to follow, ensuring us that we get back to the dock within the designated time, so it is quite easy just to look for the right color at each junction. Canal signs are pretty similar to road signs, so it is easy to understand if a canal is a dead-end or if no entry is allowed. Most of the narrower canals are one-way, so all boats have to cross the lake to go back to the village.

Navigating the maze of canals is pretty straightforward and piloting the boat is not very complicated. The boats are sturdy enough they can handle a few side scrapes and even some head-on collisions with the canal bank.

Other enjoyable activities in the village are trying out the local delicacies and shopping for local handicrafts and souvenirs.

For people who want to explore and see the Dutch countryside while have a relaxing day outdoors, Giethoorn is a great way to spend a day out of Amsterdam.

Public and private sectors in the North and Central Luzon regions have expressed their full support for the ongoing upgrading of the...
Read more

Grab, together with the National Taskforce on COVID and the Bases Conversion Development Authority, is launching its own RT-PCR testing site dedicated...
Read more
00:01:30

The MRT augmentation is a consortium of 90 buses meant to augment the capacity of the Mass Railway Transit-3.  It starts out from...
Read more

The NLEX Philippine Arena Interchange in Bocaue, Bulacan will reopen to the public on August 1, 2020 after being closed due to...
Read more