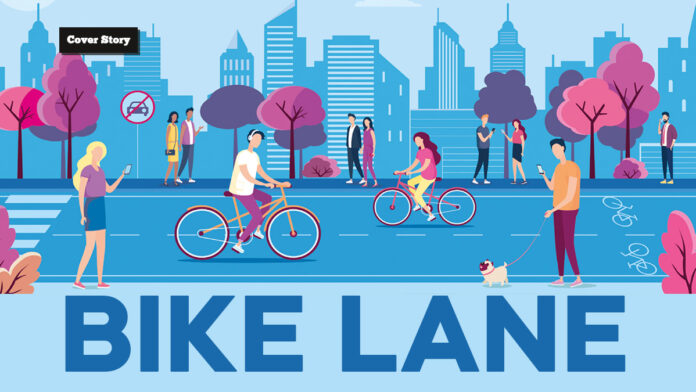 With the increasing fuel prices, the new protected bike lanes will not just provide the cyclists with safe, available, shared road space but also encourage the public to adopt micro-mobility alternatives.

Unstable oil prices, alarming levels of greenhouse gases in the metro, and the threat of climate change have forced the world to look closely at the modes of transportation, especially those with high levels of emission gases. In the Philippines, the largest contributors to greenhouse gases are private and public vehicles. This is compounded by the heavy traffic congestion in Metro Manila, resulting in the release of tons of carbon dioxide/monoxide and other exhaust gases daily from standstill traffic.

While the Covid-19 pandemic impacted heavily on the movement of people and their livelihoods, it became a catalyst for us to examine our mobility. In Covid-19’s early months when the total lockdown imposed in the country reduced the number of vehicles on the road to almost none, it was a pleasant surprise to breathe cleaner air in the metropolis. The daily morning smog over Metro Manila slowly cleared, making the area visible again from Antipolo.

Prior to the Covid-19 pandemic, I had heard various groups advocate for the use of bicycles and electric scooters to reduce not only the volume of vehicle traffic but also pollution from harmful exhaust gases. But efforts to move the advocacy forward seemed to move very slowly, especially when the concerned agencies were preoccupied with problems involving motorized vehicles. Not so many people were concerned about responding to the call of the environmentalists.

The limitations in mobility due to travel restrictions during the pandemic highlighted the need for a personal mode of traveling from home to work. Health workers who were required to man and operate medical facilities had to walk many miles to fulfill their duty.  Workers running the food supply chain arrived at their workplace already exhausted from walking tens of kilometers from home.

But not for long. They began to rediscover the bicycle and kick scooter as viable modes of mobility, in the absence of a working public transport system. In a matter of days, thousands of cyclists began to fill the empty roads of the metropolis.

The government agencies, namely the Department of Transportation (DOTr), the Department of Public Works and Highways (DPWH), and the Metro Manila Development Authority (MMDA), responded by considering the long-time clamor for bicycle lanes to protect cyclists from motorized vehicles. On 27 July 2021, the Metro Manila Bike Lane Network was formally inaugurated. The country’s longest bike lane network cut through the 12 cities of Pasig, Marikina, Quezon City, Caloocan, Manila, San Juan, Mandaluyong, Makati, Pasay, Las Piñas, Parañaque, and Taguig. It has an overall length of 313-kilometers of bike lanes ranging from 1.5 to 3.0 meters in width.

To integrate bicycle lanes into future roads and highways, the DPWH released in September 2020 a department order prescribing the design of bike lanes along national roads. The agency wanted to make roads safe not just for motorists but for cyclists as well.

The Metro Cebu Bike Lane Network was also opened in 2021, with 129-kilometers of protected lanes cutting through the cities of Cebu, Lapu-Lapu, Mandaue, and Talisay. It features white and green pavement markings, signages, bollards, bike symbols, and concrete delineators to keep bike riders safe. The network also has solar studs, and bike racks for the convenience of bikers.

With the opening, too, in the same year, of the 55km Metro Davao Bike Lane Network, a total of 497-kilometers of bike lane networks in metropolitan areas nationwide were opened up, encouraging more people to use bicycles and other eco-friendly personal mobility devices. According to DOTr Assistant Secretary for Road Transport and Infrastructure Mark Steven Pastor, the bike lanes maximize road space use as these can accommodate 1,250 cyclists per hour for every meter of road space.

Former DPWH Secretary Mark Villar said the bike lanes are of great help to workers and commuters in Metro Manila who have taken to active transport in going to their workplaces and other destinations amid the pandemic. “Born out of the resourcefulness and dedication of workers despite the pandemic, active transportation such as cycling became the obvious solution,” he said.

The completed project, connected to the existing 313-km Metro Manila Bike Lane Network, is part of the DPWH-DOTr’s strong commitment to promoting active and environmentally sustainable transportation in the country.

Concerned agencies must not stop laying more bike road networks all over the major cities. The present 650+ kilometers of bike lanes is too little if we expect millions of cyclists on the road.

“Because of this bike lane, it’s a game-changer. It will change everything — the mindset of everything. This is really a great project,” said then MMDA Chairman Benjamin Abalos, Jr.

While travel restrictions are easing up under the new normal and public transportation is becoming available, the number of people using the bicycle lanes continues to grow.  With an expanding base of bicycle users, the bicycle market is booming with prices more affordable for daily wage earners.

The planned imposition of new taxes on motorcycles and the endless fuel price increases will push more people to shift to bicycles and other active transport devices. This will be good for our environment as fewer exhaust gases will be released into the atmosphere.

As more and more citizens move towards sustainable transportation like bicycles and electric scooters, fewer high-polluting jeepneys and buses will ply the roads. As responsible citizens, this is our humble way of contributing to the preservation of the environment, while keeping our bodies healthy and fit.

‘Tis the season of giving, virtually