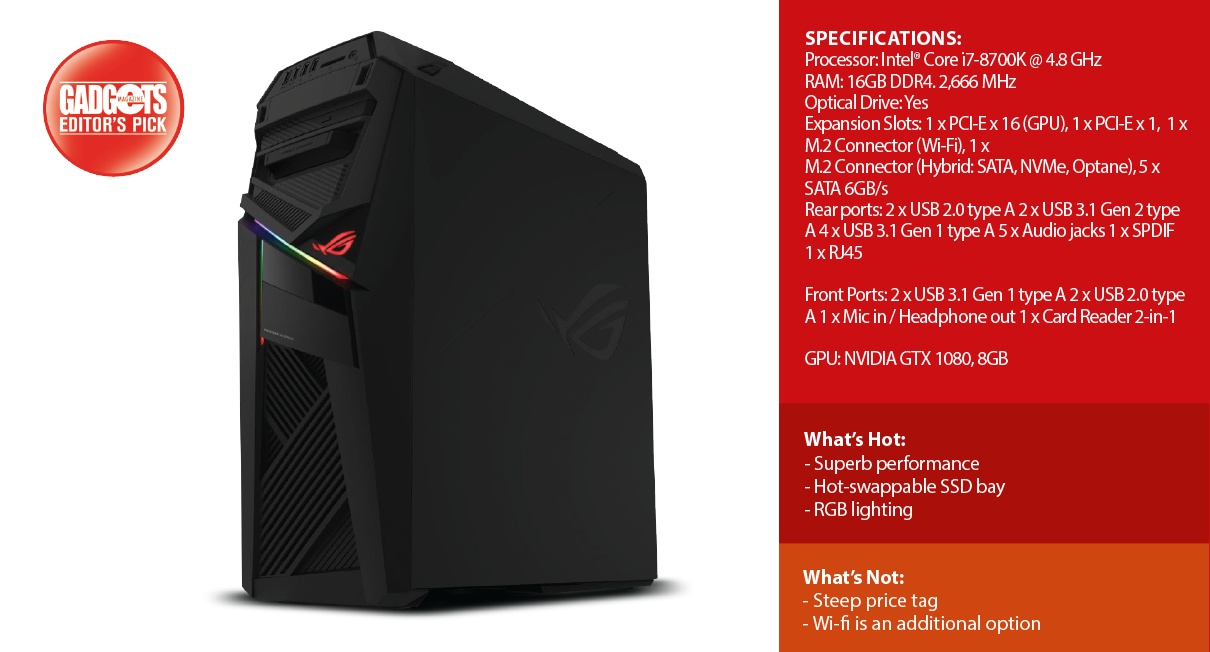 Having been gaming on a laptop for years now, I have forgotten the sheer joy a proper gaming PC can bring. Fortunately, our friends at Asus saw to rectify that situation for a few weeks with the Strix G12. Life hasn’t been the same since.

PC modding is big business, and for good reason. A lot of work goes into making a PC meet your desired performance levels. The Strix saves you the trouble. It’s got RGB lighting right out of the box, and even comes with an acrylic side panel so you can see all the glorious goings-on inside the rig.

Design-wise, this Strix desktop is very ROG. sharp angles, and a multi-faceted design give it an aggressive look that remains understated enough to not look cheap. Variable color LEDs are visible on the front, and the ROG logo features prominently to one side, so you know just what this laptop is capable of. To facilitate side panel replacement, thumb-turn screws are provided. The CPU has about a mid-size profile, and doesn’t take up too much room, and even has ports at the top edge, for easy access.

Being an Asus ROG machine, you know there’s some power in there. The star of the show is the massive Nvidia GTX 1080 with 8GB of VRAM, but the party doesn’t stop there. Our review unit came with 16GB of DDR4 RAM, and an Intel i7 8700K running at 3.7 GHz. It also came with dual storage–a larger 1TB HDD for all your files, and 512GB of SSD storage for the OS and games, for speed. Since it’s mostly for gaming, and gaming waits for nobody, it still has an included optical disc drive, for physical copies–something I approve of on desktops.

I’m a sucker for RGB lighting, so I’m not ashamed to say that’s the first thing I got into. Fortunately, Asus has software built-in to handle all the gaming controls. From the app, you can fully control the LEDs, as well as monitor system performance (thanks Aegis III), and tweak pertinent settings, such as data prioritization thanks to GameFirst IV, to ensure your gaming goes smoothly.

With such powerful hardware, temperatures start to be a concern. Even less demanding games like Overwatch can really get your graphics card a workout. To keep performance levels high, and temps low, they separated the spaces for the mobo and its components, from the PSU and storage. Cooling air is then moved along by three surprisingly quiet fans, for noise-free gaming even at higher loads. Overwatch, with all the settings bumped up to max, and the render scale past 100 percent, can be quite a difficult game to push. Even at the worst clashes, with the most action going on in-game, the Strix remained composed, with no annoying whirring while maintaining a steady above-50 frame rate. Speaking of frame rates, this rig can handle anything from VR, to 4K, and even 240Hz G-Sync monitors, for flawless graphics, well into the next few years.

Audio is another thing that Asus does well. More and more, audio becomes an important game element. Whether it’s to enhance gameplay with music, or to let you know that the bad guys are off to the left and behind you a little bit, audio is now as important as the things you see on the screen. More than just a gimmick, Sonic Studio II gives great control over in-game audio, and keeps comms clear, so you can communicate with your team over the game. We’ve been playing a lot of team-based games that require clear comms and good directionality, so this is a particularly useful thing. Escape From Tarkov is a punishing game if not everything is on-point, but the Strix can deliver the audio performance we were looking for.

An additional feature we were pleased to find was the bay for hot-swapping SSDs. This opens up a lot of possibilities particularly if you have other gaming rigs, or move around a lot. It’s great to have, and something you’ll end up using a lot once you realize how useful it is.

The gaming experience on the Strix GL-12 is about as good an experience as I have had in the past. Consistently smooth, even on recent, graphics-intensive titles such as Battlefield 1, it’s a great way to get into the title. Even an older title such as Overwatch, looks so much better when you can turn the settings all the way up, and your PC doesn’t complain. Should you need to upgrade in the future, the Strix makes it easy, with simple access to components, and plenty of compatible hardware, though you shouldn’t really have to worry about that for a year or two. An upgrade you might want to have included out of the box is Wi-Fi, as the convenience of being able to relocate your device at any time is a great thing to have.

The price for having the convenience and power of this particular gaming PC is admittedly steep at PHP 129,995, but the performance really is remarkable. While it’s certainly not for everyone, if you have the coin for it, this is one of the more powerful ways to get your gaming on.

I’m getting one as soon as I get rich.

”Finding Joy,” Acer Philippines’ anthem for the holidays and even beyond aims to bring hope and give strength to Filipinos to break barriers in...
Read more

Its elevated design may catch your attention first, but it’s the inside that will really reel you in. The new HP Omen 15 Laptop...
Read more