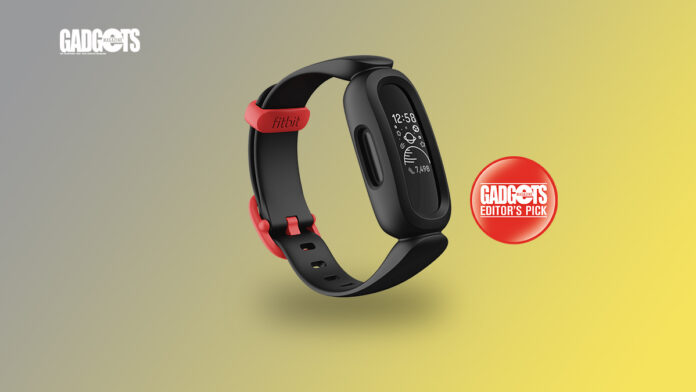 I was super excited when I first heard from my mom that I will review the Fitbit Ace 3!

The Fitbit Ace 3 is a watch that tracks steps, activity, and even sleep. I got the one that has black and red color—it looks very cool. The strap is smooth and rubbery.

Its main parts/components are the band/strap, tracker, and charger cable. The charger cable is a bit short. The Fitbit Ace 3’s display is really nice — you get the option to dim or brighten the screen. The watch’s battery is supposed to last 8 days but when I wore it 24/7, it lasted about 9-10 days. It is also waterproof — I tried this out for real to see if it’s really true. I clicked Water Lock and used the watch when I took a bath and it still works!

Mommy comments: You have to press the sides firmly to unlock. To kids, they may find this difficult but it may actually be a security feature so the watch is not unlocked easily while being used in/under water.

Using the watch for a couple of weeks, I liked that it was so light, like it was not even there. I liked being able to change the clock faces so it looks different every time you change it. The tracking of steps is very accurate. The watch also reminded me with a small vibration to move when I was just sitting or lying down doing nothing. I used Countdowns and Stopwatch in some of my games such as Hide and Seek, jumping rope, and others. I just had to clean the watch daily, otherwise, it caused an odor on my wrist.

The Fitbit Ace 3 tracks sleep very accurately. It gets the actual time that I sleep and wake up. I can’t believe how restless I am when I sleep!

The Fitbit Ace 3 has no games or entertainment though, so some kids might get bored easily. Another thing that I don’t like about it is that after using the watch almost the whole day for a few days, it caused some ouchie on my wrist. I had to transfer the watch to my other wrist for a day or two, then it was okay.

Mommy comments: Even though we impose a sleeping time for the kids, the watch made me aware that my child was not getting enough sleep because he does not fall asleep right away after the lights are turned off. I also did not realize that the number of times my child was restless and awake in the middle of the night affected his total time asleep.

Overall, I think it is awesome and every kid should have it.