For a lot of people, PC gaming can be quite an intimidating thing to get into; not everyone knows how to build a rig from scratch, and really it’s more convenient to just pick up a console and start playing out of the box. However, pre-built gaming desktops are becoming more and more akin to their personalized counterparts in terms of power and flexibility. Lenovo’s new iteration of the Legion Cube is one such machine.

The Y720 Cube is aesthetically identical to its predecessor the Y710, and with this rig, I’m very much okay with it. Why change an already perfect thing, right?

The rig’s outer shell is a cross between the strong lines and angles of an Art Deco train and the badassery of the Black Knight from Monty Python and the Holy Grail (Tis but a scratch!). Its facade is fierce and assertive, combining inclined panels and accented by a Y-shaped light and two more lights near the base. The front tapers to the back, with exaggerated vents and bevels adding to the handsome exterior. The folks at Lenovo smartly combined matte, glossy, and carbon fiber-textured plastic with metal mesh to give character to the tower.

In terms of practicality, the Y720 Cube is designed to be accommodated by even a small desk in a small flat without taking too much space. It even has a carry handle for easy transportation.

This thing is built for speed, and like the giant chain of malls, it has it all for you. This VR-ready machine runs on a 7th generation i7-7700
quad-core processor with a base frequency of 3.6 GHz and a maximum turbo clock speed of 4.2 GHz. The configuration I was able to use had 16 GB of RAM, a 128 GB SSD and 2 TB secondary HDD with a write speed of 7200 RPM. Lenovo allows for memory options of up to 32 GB RAM and a 256 GB SSD. In terms of graphics, the version I used had an NVIDIA GeForce GTX 1070 with 8 GB of video memory.

The Y720 Cube also has a healthy amount of connecting ports: four USB 3.0 ports in total (two each in the front and the rear), four USB 2.0 ports, one PS/2 port, one HDMI port, one VGA port, one DVI port, a microphone jack and a headphone jack for the front, as well as three audio line-out and a line-in in the rear. It does not, however, have a USB Type-C port.

The desktop can connect through Wi-Fi or LAN, both powered by Killer drivers, delivering high-speed internet. It also has Bluetooth, Dolby Home Theater 7.1 channel surround sound support, an optional Xbox One Wireless Adapter, and even a powerful 65 W cooling fan. What it doesn’t have is an optical drive. But it’s 2017, man. Get with the program and buy digital.

I don’t think there’s much to say except that I had a blast having a go at the Y720 Cube. And like I said before, this thing is fast. Turning on and restarting will take literally just a few seconds depending on how many applications run on startup. Everything else is just as fast: file transfers, downloads (thanks to Killer’s network priority function), and loading up games will take only a short while. 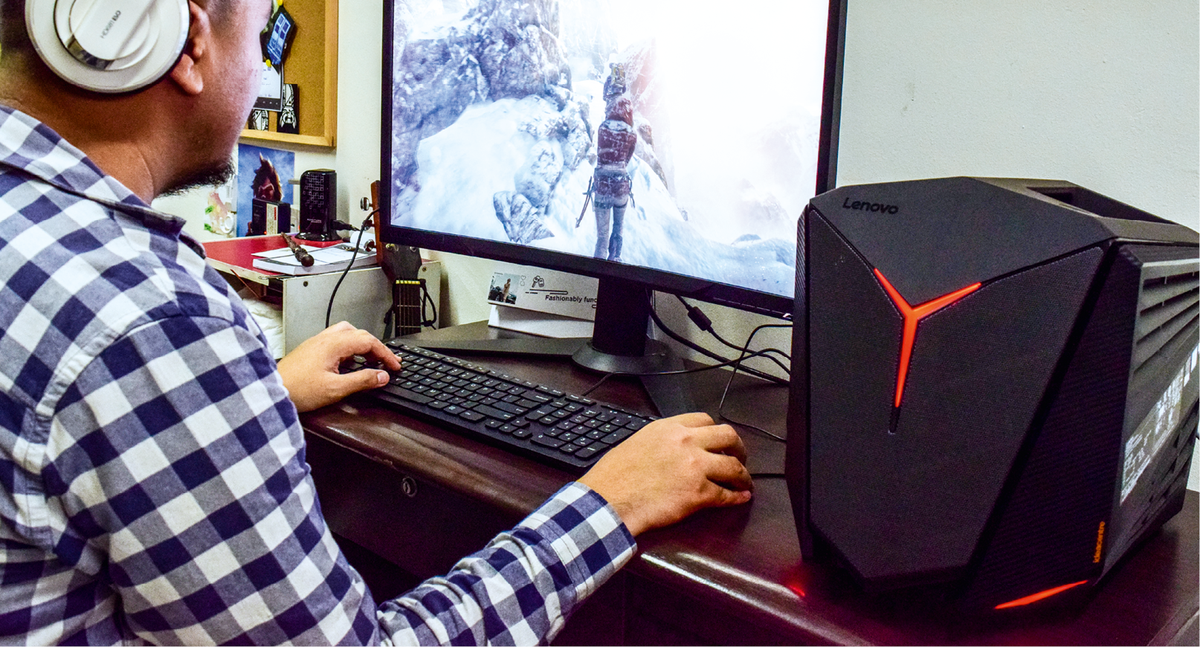 In terms of performance, the Y720 Cube is a beast. Even when playing graphics-intensive games like The Rise of the Tomb Raider, Battlefield 1 or Bethesda’s Prey, the desktop gives smooth frame rates on very high to maximum settings–although for The Rise of the Tomb Raider, which sucks up so much hardware, I had to tweak a setting or two to optimize it, but I won’t chalk it up to the rig, that game is just so needy. It also has to be repeated that this thing is VR-ready, which pretty much tells you how much power you’ve got under the hood.

Other hardware-pushing tasks like editing and rendering high definition video, or multiple videos for that matter, barely slows the thing down. It really is great for everything.

And this is where perfection is rendered, well, imperfect. The Legion Y720 Cube is priced at PHP 81,990 for the base model, and if you consider that it’s just the gaming tower, and you still have to buy gaming peripherals such as the monitor, the keyboard, and the mouse, you still have a lot to spend after that initial dent in your wallet. Having said that, Lenovo makes the case for the Cube, quite literally, with a beautiful exterior and a well-balanced machine that’s been optimized with the right parts that would work well together.

Bottomline
If you’re thinking of adding a bit more sophistication to your gaming inventory beyond the consoles, and you have the moolah to shell out, the Lenovo Legion Y720 Cube is a good place to start.