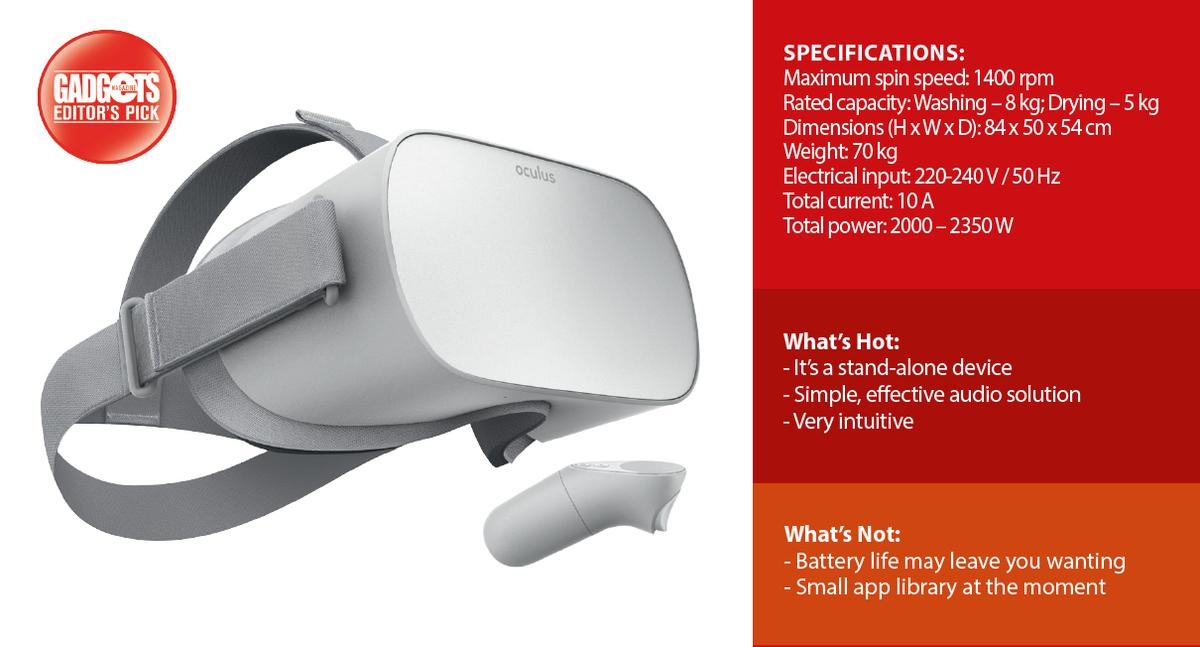 VR has made it to the average consumer through such devices as the Gear VR, and if you live in the right places, you can head over to your nearest tech retailer and walk home with a perfectly capable VR headset. The Oculus Go is Facebook and Mi’s first bold foray into the VR space, and we’re lucky enough to get our hands on one. Is VR for all finally here?

The unassuming gray device is reasonably sized for a computer that sits on your head—190 mm x 105 mm x 115 mm. Tipping the scales at 468 grams, it’s not exactly light, but it weighs little enough that it isn’t really a problem, at least while it has enough juice to run.

Controls are scant. There’s just a power button on the top of the body, flush with the outside case, and a volume rocker just beside that. Off to one side, you’ll find the microUSB port for charging, and a 3.5mm headphone jack, if you feel like using your own earbuds.

The Go also comes with a small, AA-powered controller, which itself has a trigger for your index finger, buttons for Home, and Back, and a clickable touchpad that’s easily accessible with your thumb. It’s quite ergonomic, and very intuitive—a testament to the design team behind it.

Built around the Snapdragon 821 SoC—a highly capable flagship brain for its time, the age of the chipset is offset by the fact that it does VR, and nothing else. There are more tweaks that went on under the hood, so don’t feel like this is old tech in the least. It has a single 2560×1440 LCD display, with new lenses that make it more similar to the Oculus Rift than the Samsung Gear VR devices that are essentially the Go’s cousins.

The designers included a clever audio solution with the device. Aside from the standard 3.5mm audio jack, the Go has speakers hidden in the arms that hold the lateral head straps in place. This solution allows you to hear stereo surround without having inconvenient wires snagging on everything.

Connectivity options are limited to Wi-Fi and Bluetooth, which is fine, as you’re not likely going to be using this outdoors anyway.

For anyone who has tried any VR solution short of the Oculus Rift, the Oculus Go hits it clear out of the park. Even against the Rift, the Go has a few advantages that put it way ahead of its bigger, more powerful brother.

The soft, wide straps have plenty of give while remaining secure, and the reasonably light weight of the main device, coupled with generous padding allow for comfort, even when you essentially have a computer strapped to your face.

For its part, the wireless controller is light, accurate, and carries a shape not unlike modern gamepads, meaning it feels familiar. The buttons all actuate positively, with a great feel to them, and the small thumbpad is very responsive to touch input.

As someone who has been generally disappointed with other commercial VR solutions out there, this is something that really impresses. Head tracking via internal gyros is spot on, buttery smooth, and devoid of any noticeable lag, stutter, or flicker. It’s immersive in a way that is at least at par with some of the best VR solutions available right now, such as the PS VR, but without all the lights, wires, and, of course, a whole other gaming console powering the whole thing.

The list of apps in the proprietary app store isn’t that large at the moment, with plenty of options also available on the Gear VR, but porting “lite” versions of Rift titles is reportedly not going to be too difficult, so that, plus the wide accessibility of the Go, means we will be seeing more and more titles as people pick the device up. As it stands though, there are already some standout titles, some free, others paid, enough to make a purchase worthwhile.

It’s not without its shortcomings. There is quite a gap between the device and the bridge of your nose, so you can see the real world below the screen. Your brain adjusts eventually though, and soon you won’t even notice it. Audio also leaks like a sieve, since the drivers are some distance from your ears. Even at lower volumes, anyone seated next to you will be able to hear just what’s going on. As a side note though, having someone seated beside you might not be the best idea, as you might hit them while swinging your controller around. You’ve been warned.

Battery life is something of a mixed bag as well. With about two hours of juice in its tank, the Oculus Go isn’t going to be able to hold a candle to its wired competition. However, it’s only fair to note that using a VR headset for any more than two hours at a time is a feat in itself, so you really aren’t losing too much here. Those who intend to use it to view movies or shows privately through the Netflix app may be in for a disappointment as to go time.

The magic here really isn’t the experience pre se, it’s the fact that it does it so well, as a stand-alone device.

At USD 199, this is a must-have for those absolutely rearing to be a part of the cutting edge of consumer VR. There’s not a whole lot to do with it at the moment, so if you’re on the fence, maybe give it a bit of a wait. We’re gonna get there eventually.

Yes if you’re curious, wait if you’re not, but this might just be the start of something great.

Get productive with realme and Logitech this 2023