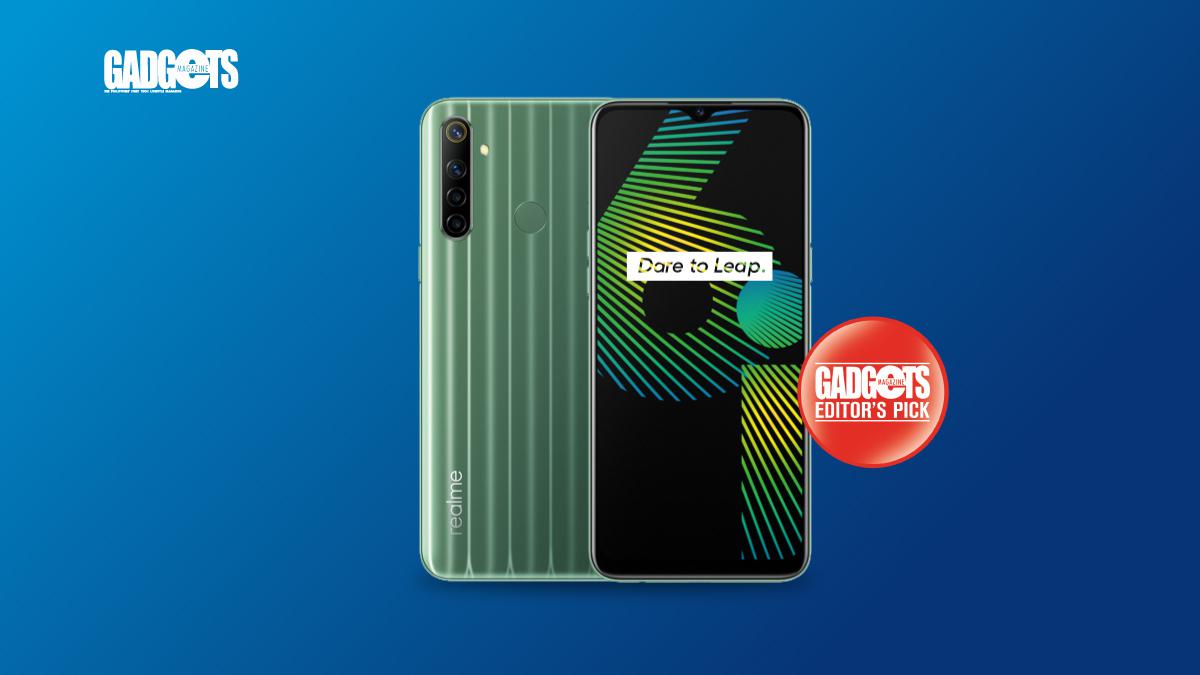 Being cooped up at home has caused many people to update their things. Some have gone clothes shopping, others buy toys, and the rest of us have taken to refreshing our devices. Realme, a brand that has been very aggressive lately, gives you a reason to ditch your old, slow smartphone, and join team Realme with the 6i. Is it worth the price of admission, or should you wait for the next wave of devices? Let’s take a look.

While it’s honestly hard to be impressed with smartphone design these days, realme has been able to keep things fresh. While more or less standard, the 6i has a visually striking back, done with a very interesting ridged design. The back itself is smooth, but it refracts light in a way that makes it look like that popular brand of expensive aluminum luggage. realme is a brand that has mastered compromise, taking a little off here and there to keep costs reasonable, while still offering a phone that punches above its price class. The 6i is no exception. They opted against the use of a curved screen, but it’s larger, and the rounded corners make the bezels look smaller than they actually are. There’s a small notch at the top for the front-facing camera, and wonderfully little else, for a mostly uncluttered face. Controls are limited to a power button on the right side, with volume keys on the opposite edge of the phone. There’s also a fingerprint scanner on the back, which I still hold to be a great spot to put it, allowing it to unlock faster and more consistently than most phones with in-screen fingerprint scanners.

Hardware-wise, we should first talk about the screen. More of realme’s mastery of component choice vs price can be seen here. While you don’t get a full-HD screen, it is quite massive, and paired with the rest of the hardware, you really don’t need all that high a resolution anyway, so there’s no reason to make the display more detailed and expensive. To make your gaming experience better, it comes packed with a Mali G52 GPU, as well as 4GB of RAM for our review version, and an absolutely massive 5000mAh battery for hours of battery life. One of the best things about it is also a 3-slot card tray that will hold 2 sim cards and a microSD card, so you don’t have to compromise storage for connectivity.

The Helio G80 chipset is no slouch, and coupled with a generous 4GB of RAM, makes daily tasks and navigation feel as smooth as you’d ever need. You wouldn’t be able to tell it isn’t a flagship-level device just based on system responsiveness based on navigating menus and launching apps. The fingerprint scanner is also pleasingly fast, waking the phone without a moment’s pause.

In games such as CoD Mobile and PUBG Mobile, I didn’t really miss anything for the lower listed resolution, and the Mali-G52 GPU that drives the action had absolutely zero problems feeding me frames. It’s a great pairing of display and GPU that delivers great performance, while keeping the cost wonderfully low. Great job here, realme. Frames win games, and this phone can deliver. Game Mode is a great help too, giving you the ability to quiet notifications with a quick swipe and a tap, as well as monitor basic system details. If you’ve ever had problems with notifications ruining your meticulously lined up shot, this is a great way around that, with system optimizations to boot.

Camera performance is likewise impressive. It does have a quad-camera setup, with a 48MP sensor doing the brunt of the work, as well as a dedicated B&W sensor, though it should be noted that to access the ultra-wide sensor, you can’t just pinch—you’ll have to slide to the ultra-wide function to access it. Camera performance is solid, and good lighting makes it remarkable, particularly for the price. Low-light photography with the 6i is also quite solid, with shots getting a nice little bump to saturation and vividness that realme is always proud to highlight. There’s loss of detail when you zoom in tight, but much more quality than what you’ll need to keep memories and post on social media.

Probably the best feature of the realme 6i though, is the price. At PHP 9,900, this is superb value for money. This is a 4GB/128GB device, running the very capable octa-core 2GHz processor, Mali G52 graphics, and a massive screen. If you aren’t getting the hint that Realme wants you to game on this phone, we’re telling you outright. All of that, again for less than ten grand. It’s a wonderful balance of features and compromise, and one that you shouldn’t pass up if you’re in the market for something in this price segment. Add it to your cart, check out, and you won’t be disappointed.

realme has done it again, delivering a phone that gives you what you need, with no costly extras.