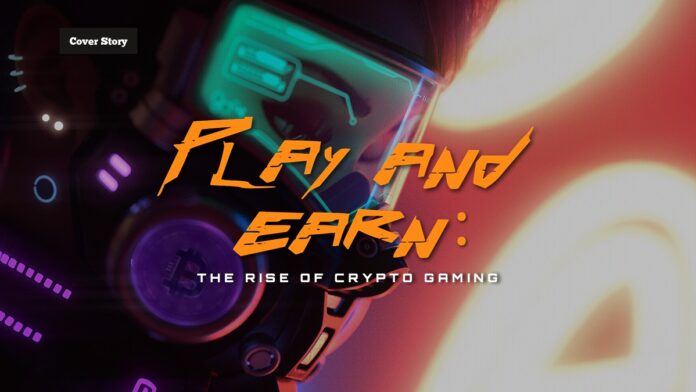 As technology evolves, the future of gaming has also significantly changed. From traditional board games to four-dimensional interactive video games, people are playing not just to win and see their names on top of the scoreboards. They are now also playing to win rewards that they can exchange for actual cash through crypto games. Adopting a play-to-earn model, crypto games skyrocketed in popularity during the COVID-19 pandemic. All you need is a decent internet connection, a smartphone or laptop, a digital wallet for storing cryptocurrency, and extra funds for buying cryptocurrency.

Before discussing what crypto games are and how it works, you must understand the technologies behind them. Crypto games have three major building blocks: blockchain, cryptocurrency, and NFTs.

Blockchain, in its simplest definition, is a specific type of database that stores data in blocks that are then chained together. Each block in the chain represents several transactions. When new data is entered, it is added into a fresh block. When a block is filled with data, it is chained to the previous block. This makes data more organized since these are stored in chronological order. You can type different types of data on the blockchain. However, blockchain is most commonly used as a digital ledger of transactions that can be duplicated and distributed across the entire network of computer systems. Blockchain is also a type of Distributed Ledger Technology (DLT) that has a decentralized database managed by multiple users. This means blockchains are not controlled by a single group or entity. To ensure security, transactions are recorded with an unchangeable cryptographic signature called the hash. This algorithm converts verified transactions to a random set of unique numbers and letters. As a security feature, hashing makes the data processing irreversible. In finance tech, blockchains are the digital counterpart of brick-and-mortar banks.

Last on the list are non-fungible tokens or NFTs, which are unique and irreplaceable cryptographic tokens on a blockchain. What makes these tokens different from one another are the identification codes and metadata. NFTs can represent high-value items such as artworks, real estate, rare items, and the like. However, NFTs cannot be exchanged with the same equivalent value, unlike cryptocurrencies. The process in which people buy, sell, and trade real-world tangible items is called tokenizing. This simplifies trade with the removal of third-party financial firms, which can then create new markets. NFTs are primarily used for selling digital art and exclusive items for crypto games.

Crypto games in a nutshell

Now that you know the basic elements of crypto games, you should know how these elements work together. Crypto games usually follow a play-to-earn blockchain structure. According to British investment firm Capital, this model allows players to earn rewards. You can get these rewards when accomplishing quests in the game. To get more rewards, players can increase their level and improve their character and skills. Players can sell the rewards, which are also a cryptocurrency, to generate an income. They can withdraw directly from their digital wallets to their bank accounts for actual cash. Another good option is to trade their earned tokens in the game, which they can use to buy more characters or even weapons. All NFTs and cryptocurrency transactions are stored on a decentralized blockchain system. This helps players keep track of their in-game assets, secure their earned rewards, and complete successful peer-to-peer transactions without an intermediary financial entity.

To make ends meet during the pandemic lockdowns, many Filipinos became crypto traders by playing Axie Infinity. Developed by Vietnamese studio SkyMavis, the card crypto game rose to fame with its simple mechanics. To form a team, players must buy three adorable creatures called Axie using the Ethereum cryptocurrency. They must go head-to-head against other teams to gain SLP (Smooth Love Potion) or Axie Infinity Shards (AXS). The former can be traded in the blockchain, while the latter can be used for breeding more Axie pets.

Another game that you can explore is the virtual pet game My DeFi Pet which revolves around collecting, feeding, and breeding rare monsters that you can eventually trade to make money. The more you breed, the more you can gain DPET tokens which are the in-game coins. Players must have at least one monster egg to hatch. Its fundamental feature includes passive earning, where they can earn up to 5%. KardiaChain, an interoperable blockchain platform in Vietnam and South East Asia, launched My DeFi Pet last May 2021.

Last and the latest in this list is Plants Versus Undead, a multiplayer tower defense game where the user’s plants, which are also NFTs, battle against waves of undead creatures. Its native currency is called the PVU token. Those with a BSC token can also play and invest in the game. To make a profit from unused assets, players can play under the Farm mode. Each player must have 5 PVU to get started. When farming, players can be rewarded with Light Energy (LE) by planting their own seeds, watering their farm, and harvesting plants. To cash out, players can convert a minimum of 150 LE into 1 PVU token. However, this is only possible if players have at least a single NFT plant. The main goal in farming mode is to accumulate enough LE to buy seeds that can be used in its developing gameplay: PVP and PVE survival modes. Players can also use LE to get new NFT plants for trading. The latest World Tree feature replaces the current daily quest system by rewarding all players who participate in growing it. To earn more rewards, more players must participate.

Crypto games as an investment

John Reyes and Joham Du are just among the 30% of Axie Infinity players from the Philippines. Just like most Filipino players, Du decided to be a scholar with his friend, who is the manager of their team. This setup allows newbies to dip their toes into crypto games without losing too much money. However, both parties must agree on the division of revenue. Most scholars spend their time playing the game while managers fund the capital for buying stocks. Reyes, on the other hand, equally shares an account with his friends.

For seasoned gamers, crypto games like Axie Infinity are easy to understand since most gameplays already exist in ordinary video games. However, it is challenging for ordinary people who join crypto games to gain additional cash. Reyes and Du agree that developers should offer user-friendly UI and guides if they want to expand their market.

Both see crypto games as an investment. Du finds crypto games interesting and believes in their potential. “Playing daily makes everything easier. At first, it isn’t easy since you need to learn more about how each NFT works. You need to know how to upgrade your Axie for skills to counterattack enemies and earn more rewards. It’s important to research and invest in what you can lose since cryptocurrency is volatile.”

The only caveat that they see is its accessibility and volatility. Although most crypto games are multiplatform, the purchasing power of Filipinos, as well as unpredictable exchange rates, are factors that need consideration when looking into crypto games as a sustainable source of income. “It will take a lot of time before the market stabilizes since the blockchain technology is relatively new,” Reyes concluded.