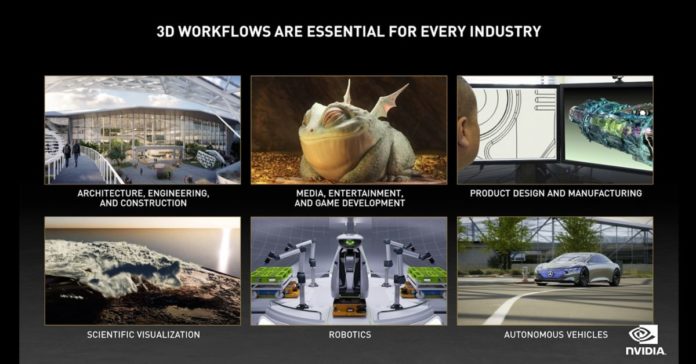 Richard Kerris, head of worldwide developer relations and general manager of NVIDIA Omniverse was among the invited speakers at Computex, the world’s largest conference focused on the PC industry.

Kerris delivered his speech on the topic of The Metaverse Begins: NVIDIA Omniverse and a Future of Shared Worlds. In his speech Kerris shed light on how Omniverse is helping to connect Metaverse. NVIDIA is making a major difference in key industries and workflows, and it is exciting to see what new doors this would open in key industries, workflows, and for all of us.

3D workflows are essential for every industry

Early this year, NVIDIA  revealed the company’s plans on creating a ‘metaverse’, artificially created environments where companies can simulate the future before acting on it. NVIDIA aims to “create the future” by creating a virtual world thousands of times larger than the physical world. That amount of digital space would serve to recreate New York City and Shanghai, with “digital twins” of “every single factory and every single building”. By visualizing it in a synthetic world first, you get to make a lot more decisions.

NVIDIA is not alone: 3D workflows have become essential across all sorts of industries. Industries like architecture and design, game development, product development science, healthcare, robotics and autonomous driving have essential needs for 3D.

Challenges brought about by 3D workflows

Because 3D design is an extremely complex team sport, a number of challenges are associated with it. Specifically, the 3D workflow involves large teams with a broad range of skills, multiple vendors, and numerous tools. Design teams are often plagued with incompatible tools, tedious import-export processes, mistakes, and time lost. Projects are also getting bigger as demands for computer-heavy technologies like real-time ray tracing, AI, and physically accurate simulation increase.

Omniverse: A response to challenges

This is where Omniverse comes in. Kerris deems the process of developing Omniverse an evolutionary process. From 2017 to 2020, NVIDIA’s projects like Holodeck, RTX, Omniverse, and Omniverse Open Beta make up the evolution of the Omniverse of today that over 30,000 people are using.

Based on Universal Scene Description (USD) that was first developed by Pixar, Omniverse was developed to find a way to communicate all the different types of things that are going on in a 3D world across different use cases.

It has since been adopted by many: architectural software creators, product designer, visual effects artists, game developers, and more. But most amazingly, NVIDIA’s Omniverse offers a common way to communicate all the things that you’re doing on that platform. Adopters can bring those tools that they’re using into the platform without having to worry about consistency. Simultaneous collaboration is enabled for large teams in different departments working on the same thing.

NVIDIA’s partners in the Omniverse

An Omniverse for everyone

NVIDIA excludes no one in its Omniverse—there is an Omniverse for everyone. An individual working on things within his or her own creative workflows can download NVIDIA’s open beta Omniverse. On the other hand, Omniverse Enterprise is a true enterprise level platform for use across multiple different industries. Major companies use the platform to revolutionize how they are creating things. It comes with enterprise support, installation, and support for NVIDIA’s certified EGX systems.

Whether you’re an individual creator, or a member of a team in a large enterprise, NVIDIA has an Omniverse for you and invites you to download Omniverse beta and experience it for yourself. Now that we all have a reason to be excited for NVIDIA’s Omniverse, we are looking forward to making the most of NVIDIA’s platform.

The 3M Inspire Challenge for students — call for entries