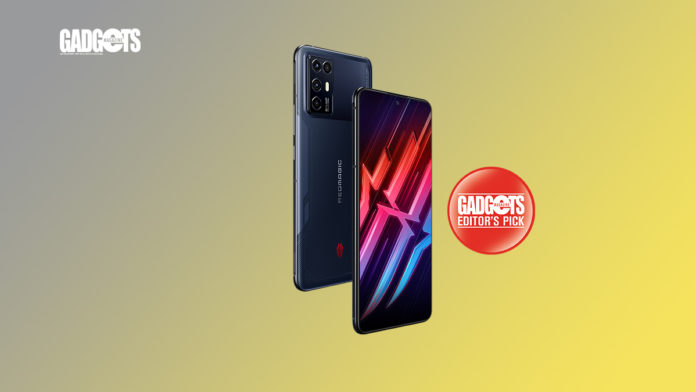 When I saw the ZTE nubia RedMagic 6R, I knew that this was one of the phones to look out for in 2021 and the perfect new daily driver. As a tech writer, I often find myself scouring the internet for some pretty cool tech. While I do find some noteworthy pieces, one rarely piques my interest enough to make me want it. But did it perform?

One of the most interesting things about the nubia RedMagic 6R that got my attention was its design choice. Gaming smartphones have notoriously been on the bulky side with very loud design aesthetics, and they’re usually attention-grabbing with their flashy RGBs and sci-fi design bodies. Not for the nubia RedMagic 6R.

The device is very subtle in its gaming nature. The only gaming design element the phone has are the subtle cybernetic lines at the back. The unit I have comes in the cosmos black color, but there’s also a mercury silver for those who want something a bit whiter. The other thing you’ll notice is the phone’s lack of size; it’s a mere 7.8mm thin (thinner than some flagships) and weighs a mere 186 grams.

At the front of the phone is a 6.67-inch AMOLED display that goes up to 770 nits of brightness. The display also has a 144Hz refresh rate with a 360Hz touch sampling rate. There is also the 16-megapixel front camera, atop which is the earpiece.

At the back is the quad-camera setup (more on this later). At the top is a single microphone hole, while the bottom has the single downward-firing speaker, the USB Type-C port, another microphone hole, and the sim card tray. There is nothing on the left side of the phone except some antenna bands. Lastly, on the right are the volume rockers, power button, and two shoulder triggers with a 400Hz touch sampling rate.

The R in 6R stands for racing, but it isn’t a boosted RedMagic 6 or 6 Pro. It’s the opposite — a slight downgrade from the RedMagic 6-series — but don’t count this phone out just yet.

What really drew me to the ZTE nubia RedMagic 6R is its processor. Like the other RedMagic 6 series devices, the 6R is powered by Qualcomm’s flagship Snapdragon 888 processor. The unit I bought had 8GB of RAM and 128GB of internal storage that’s unfortunately non-expandable. As part of its unique non-gaming aesthetic, the phone also does away with the internal cooling fan found in previous RedMagic devices.

Connectivity-wise, the RedMagic 6R has a USB Type-C that has display output capability, Bluetooth 5.2, 5G, NFC, and WiFi 6E.

The 6R did borrow a camera trend from its siblings, now sporting a quad rear-camera setup with the same 64-megapixel main shooter. Part of the same package is the 8-megapixel ultrawide camera. The new shooters for the 6R are the 5-megapixel macro and 2-megapixel depth sensor. The front camera is also a larger 16-megapixel shooter.

I had high hopes for the ZTE nubia Red Magic 6R as, on paper, it has some pretty hard-hitting specs that compare well with other flagships for double its price. Boy, did it deliver!

Let’s start with the camera. Gaming phones aren’t known for their great camera quality, but the RedMagic 6R is no slouch either. Daylight images came out well but not quite at par with most flagship smartphones. The phone can also shoot in 8K 30fps and 4K in 60fps, with videos coming out pretty alright.

Now for the fun part, gaming. I really don’t know what to say here except that I got what I was expecting. The RedMagic 6R can run any games in High or Ultra settings with max framerates. I was able to get Ultra in Mobile Legends: Bang Bang, Ultra in League of Legends Wild Rift, all high settings in Asphalt 9, and Ultra settings with high framerate in Call of Duty Mobile. All these without any noticeable frame drops. The added shoulder triggers also felt great during gameplay and can give players an advantage in some scenarios.

As a gaming phone, it has RedMagic’s Gamespace, where you can further customize your phone settings such as CPU and GPU boost and access the shoulder triggers. Using the Super Boost (boosting both CPU and GPU), I was able to play Genshin Impact at the highest resolution and setting possible, and was able to push out around 44 to 60fps depending on the scenario. The downside was the phone getting pretty hot, so a back cooler might be required for playing long hours.

Another downside of the phone is the placement of the single speaker. I found myself covering it when playing games and also during some Netflix sessions. Battery life is also not the greatest; with minimal use, it can last me a whole day, but with some heavy gaming sessions, I found myself needing an outlet in just 2 to 4 hours, depending on the game. Thankfully RedMagic added a charge separation feature in Game space so I could still play without worrying about damaging the battery.

If there’s one thing that got my attention to the RedMagic 6R in the first place was its price. For the USD 499, you get a flagship processor, gaming shoulder triggers, an AMOLED HDR10 rated display with a 144Hz refresh rate, and of course, 5G. It’s a “flagship killer” on its own but comes with RedMagic’s gaming touch. But like many flagship killers before it, you need to take good with the bad. Still, you’ll definitely get more than what you paid for.

The RedMagic 6R is a bang for the buck device for the mobile gamers out there.