Fujifilm announces the launch of the elite X-H1, the most high performance camera in the X Series range

The X-H1, with a newly-designed robust and durable body, incorporates a range of extremely useful features that support shooting in various scenarios demanded by professional photographers, videographers. The X-H1 is the first X Series model to include the latest 5-axis in-body image stabilization (IBIS), which has a maximum of 5.5 stops (*1) as well as a flicker reduction mode which enhances the quality of indoor sports photography.

In combination with the existing FUJINON XF lens range,  the camera allows the use of the 5-axis image stabilization in excess of 5-stops, with the exception of some lenses (*2).

The camera is also compatible with a range of other interchangeable lenses due for release later this year.  These include the MKX18-55mmT2.9 and MKX50-135mm T2.9 professional cinema lenses which incorporate the X mount (scheduled for release in May 2018), the XF200mmF2 R LM OIS WR, a wide aperture single-focus telephoto lens, and XF8-16mmF 2.8 R WR, designed to meet the needs of scenery or landscape photographers, both of which are scheduled for release by the end of 2018.The new camera and lens combinations will provide outstanding image production and will be ideal for fast action sports photography.

The first internal in-body image stabilization (IBIS) system to feature in an X Series camera, harnesses three axial accelerometers, three axial Gyro sensors, and a specially developed dual-processor.  Combined, this achieves the high speed of approximately 10,000 calculations per second.  When unified with compensating mechanisms, results in uncompromising image quality and precision with performance as described below.

(1) 5-axis image stabilization is possible with all XF and XC lenses.

The following technical breakthroughs have been developed to support this high precision performance:

・ A laser measurement device is used during the process of manufacturing the image stabilization unit, controlling component flatness and position with twice the precision of standard components.

・ The assembly process also includes inspection and adjustment of each individual camera to ensure that even when image stabilization is used, the parallel position of the sensor is achieved with microorder accuracy equivalent to previous models.

・ In addition, a new spring mechanism has been included to reduce micro-vibrations caused by operation of the mechanical shutter.

・ The photographer may also choose to use the electronic front curtain shutter or the electronic shutter, virtually eliminating the effect of vibrations to maximize the benefits of image stabilization. The X-H1 uses the APS-C size X-Trans™ CMOS III (*3) sensor (24.30 million pixels, without low-pass filter) and the high-speed image processing engine X-Processor Pro. This proprietary FUJIFILM technology was first seen in the X-Pro2 and then X-T2 cameras, receiving many awards globally. When used in combination with the extremely high-quality FUJINON lens, as well as the unique color reproduction technology developed by FUJIFILM more than 8 decades ago, the X-H1 produces outstanding, unrivaled quality images recording the finest details of the subject including its texture, three-dimensional structure and even the atmosphere and vibe of a particular scene.

*3 X-Trans is a trademark or registered trademark of FUJIFILM. The X-Trans CMOS III sensor uses a unique non-periodic filter array to reduce the appearance of moire patterns and false colors even without an optical low-pass filter.

(1) In addition to the camera’s dust-resistant, water-resistant properties, and the ability to operate in temperatures down to -10°C, the camera also uses a 25% thicker magnesium alloy compared to the X-T2. FUJIFILM has also modified the structure for attaching the mount, resulting in a more compact size and lighter weight body that maintains high precision and strong resistance to impact shock torsion and other sources of deformation. Increased particle size on the camera’s external surface provides a high-quality scratch-resistant coating with a surface hardness equivalent to 8H.

(2) The viewfinder is a high-magnification, high-precision electronic viewfinder. The magnification ratio of 0.75 times and the 3.69 million resolution leads the class for mirrorless cameras. The viewfinder display is extraordinarily smooth, with a display time lag of just 0.005 seconds and a frame rate of 100 frames per second, allowing the photographer to instantly confirm the movement of the subject and position of the focus with great precision. The rear LCD monitor is a 3-direction tilt, 3-inch, 1.04 million dot electrostatic touch-panel LCD which can be intuitively set to the desired angle. In addition, the 1.28 inch sub-LCD on the top of the camera, a current feature of the medium format FUJIFILM GFX 50S, allows for instant confirmation of shooting information.

(3) Improved operability with a total of 19 modifications based on feedback from professional photographers ・ The camera uses a large-grip design with the new shape and a leaf-spring switch for the shutterrelease button to achieve a stable feel when holding the camera and easy operation of the shutterrelease button to ensure no opportunities are missed. ・ The camera has the quietest shutter sound of all cameras in the X Series, making it an ideal tool for environments where quietness is required such as when shooting animals in the wild, quiet performances or at weddings. ・ A new AF-ON button has been added to the back of the camera. This makes it easier to operate the autofocus with the thumb, allowing the photographer to focus on using their index finger to operate the shutter-release button. In addition, other modifications have been made to improve operability, including the enlargement of the buttons on the rear of the camera and improvements to the grip of the front and rear command dials. ・ The X-H1 also features focus lever that facilitates rapid, accurate movement to the desired focus point.

The X-H1 is the first camera in the X Series to include ETERNA, a new film simulation ideal for shooting movies. This mode simulates cinematic film, creating understated colors and rich shadow tones, greatly enhancing creative freedom during post-processing. The camera’s video image quality has been improved through the new ability to record a high bit rate of 200 Mbps. The camera includes a total of 20 functional and performance improvements including the 1080/120P high-speed video mode (1/2, 1/4 and 1/5 speed slow motion) for recording spectacular slow-motion footage, F-log*4 SD card recording which aids smooth workflow, a DCI 4K shooting mode (4096×2160), a 400% dynamic range setting (approximately 12 stops),

Flicker reduction modes are essential for indoor sport photography, and the X-H1 achieves this using a mirrorless camera, allowing for stable exposure during burst shots even under fluorescent and mercury lighting. In addition, improvements to the AF algorithm have achieved the following performance enhancements:

(1) The low-light limit for phase detection autofocus has been improved by approximately 1.5 stops from 0.5EV to -1.0EV, raising the precision and speed of autofocus in low-light environments.

(2) The range at minimum aperture has been expanded from F8 to F11. For example, even when using the XF100-400mmF4.5-5.6 R LM OIS WR with the teleconverter XF2X TC WR, phase detection autofocus can now be used.

(3) Major improvements have been made to the AF-C performance while operating the zoom, which provides major benefits when shooting sports and other scenarios in which the subjects moves unpredictably.

(4) Subjects where results with phase detection autofocus were previously poor, such as finely-detailed surface textures;  wild birds and wild animals, can now be captured at high speed and with high precision. 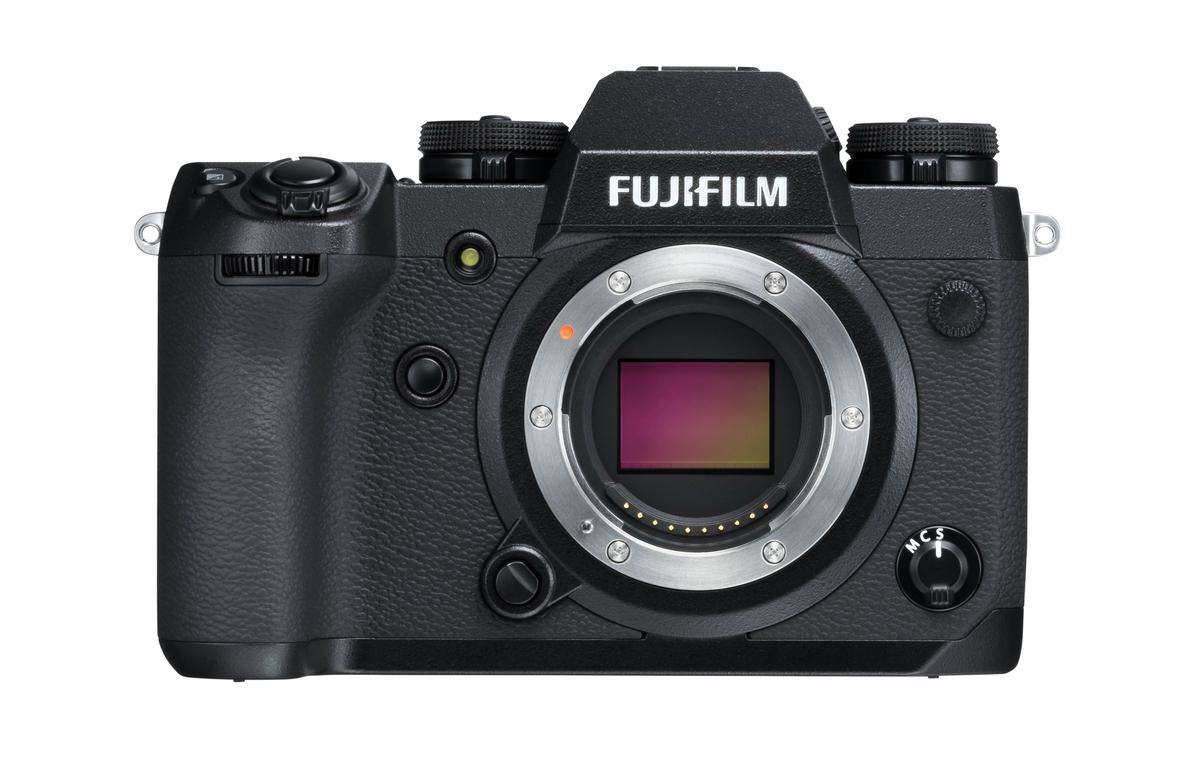 The wide cup covers a broad area around the eye, greatly reducing light interference and enhancing concentration during long shoots. The eye cup can also be rotated in 90° increments, making it adaptable for either the left eye or the right eye and for shooting in either vertical or horizontal position. The cup also includes antistatic coating, reducing the adherence of dust.