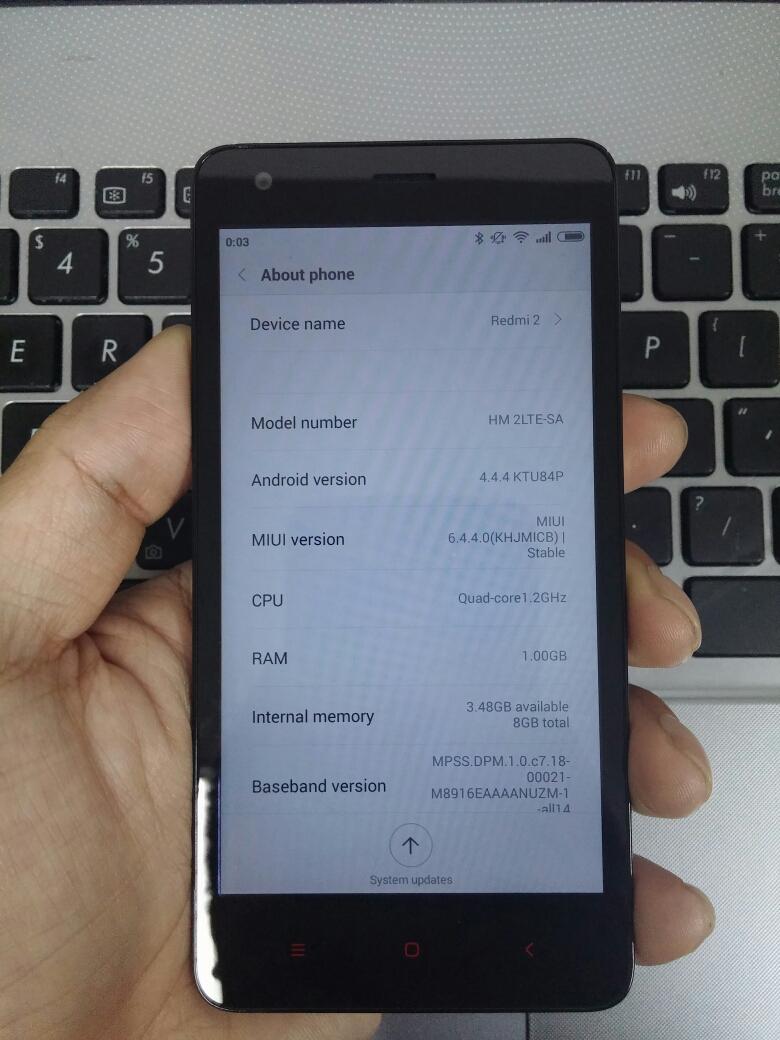 Mi, the company that brought us the wildly successful, well-received Redmi 1S is set to repeat that same success with the Redmi 2. We’re lucky enough to be part of the initial group that got our hands on the device, and here’s what we think.

I’m a sucker for a simple design. The Redmi 2 is a basic candy bar, with a healthy, though not unreasonable bezel around the screen. Our test unit came with a clean white back plate, though it is removable, in case you’re one of those people who feel the need to match their clothes and accessories 100 percent of the time.

The front of the phone is bare, save for the earpiece, the front-facing camera, and three soft keys (one each for Menu, Home, and Back). The only physical buttons are on the right edge, and those are for power and volume. The headphone jack remains at the top edge of the device, while the bottom is home to the microUSB port.

The third incarnation of the Redmi smartphone is slightly more rounded than its predecessor. It fits the hand a little better, and is actually slightly smaller all around. Measuring in at 5.28 x 2.65 x 0.37, it’s still a bit on the thicker side, but not nearly enough for it to be difficult to slip into a pocket.

The screen is protected by Asahi Dragontrail glass, which should allow it to hold up well to daily use.

The screen is a generous 4.7 inches on the diagonal, and has a resolution of 720×1280 pixels, for a pixel density of about 312 ppi. The IPS panel and the smaller screen size give you a great image, with no jagged edges even when you get in real close to the display. The colors are also nice and vivid, so don’t be put off by the numbers.

The Redmi 2 has some great hardware.  It packs a quad-core, 64-bit Snapdragon 410 processor, Adreno 306 GPU, 1GB RAM and 8GB of expandable storage. This becomes even more relevant once we look at the price tag (which we will later, we promise).

The feature that got us most excited is LTE connectivity for one of the two sims in the device. For those who have personal and work phones running LTE and non-LTE lines, this is a godsend, and something we sorely wished the 1S has when it came out. If you’re worried about battery life, don’t. Mi left enough room for a 2200mAh battery—large for a phone this size, and very much appreciated.

Before anything else, I have to admit that I’m a fan of what these Mi devices are doing for the smartphone scene. Devices that perform solidly, without the inflated price tags of other brands are great for the consumer, and it’s wonderful to see that Mi isn’t changing that winning formula. The Redmi 1S was no slouch when it came to performance, and the Redmi 2 surpasses even that. The updated processor and system optimization in MIUI V6 come together to give a smartphone that’s buttery smooth, and gives no delay when launching apps and switching between them.

The UI is as good as it ever was. It now incorporates a lot of Google’s material design language in the overlay, so it’s not just smooth, it’s also very pretty. MIUI V6 also has all the conveniences of the previous version, such as simple, logical switches and toggles, additional messaging features, and extremely convenient home screen UI elements and controls. IF you’ve fallen in love with MIUI, it’s all still there, and better. If you haven’t tried it, you should.

The camera performance is great as well. The 8MP BSI f/2.2 rear camera renders decent photos that hold up well enough to scrutiny, though you might want to choose another device for your next magazine cover shoot. It has a great HDR mode too, so if you’re serious about using your phone for more than just the quick snapshot, it’s a good device to have in your pocket.

Dual SIM connectivity with LTE was also a great thing to have. No longer will you have to juggle with a two phones when you want a faster mobile internet connection. You don’t even have to do any complicated configuration. Slot in the sim cards, tell it which one to use for data, set it to prefer LTE, and you’re all set. We did have a bit of a problem getting an LTE signal, though we suspect that was more a network thing, as another LTE device was struggling (though more often succeeding) to connect.

Fast data connectivity means battery life is likely to take a hit, but the Redmi 2 has a larger-than-average 2200mAh cell under the hood. You’re not likely going to be able to drain it in a workday unless you’re outside, running a hotspot and constantly keeping the screen lit. Chances are, you won’t even really have to try to manage battery use to get home with juice left. That’s something of a feat given that this phone runs two lines at once.

There’s no use trying to argue here. This phone, with this spec should have a price tag that approaches five digits. To be honest, I think that if it were another brand’s device, that’s what we would have seen. The fact of the matter is it’s Mi we’re talking about, and if you want a piece of this action, it’s going to cost you a buck shy of PHP 6,000. Yup. A price tag of PHP 5,999 seems like a typo, but that’s what it is. It’s okay. You can go back and read that again. We swear that’s right.

We hope you got yours during the last flash sale. If not, try and snag it during the next one.