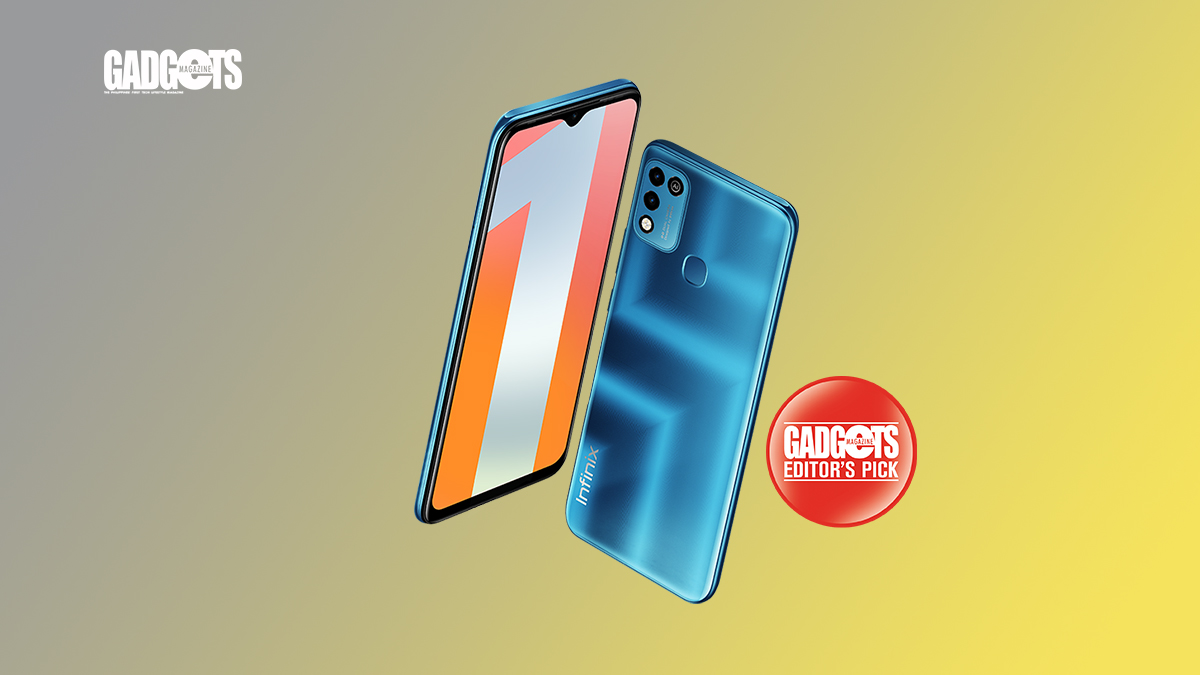 Let the Infinix HOT 10 PLAY take you to a whole new level of gaming experience. In just the palm of your hands, you could play your favorite games longer and faster with the phone’s MediaTek Helio G35 processor.

I can only describe simple and yet astonishing things from the look of the Infinix HOT 10 PLAY smartphone. The review unit that we received came in the obsidian black colorway. It has a stylish pattern design on the back of the phone and its slim build made it easier to hold in one hand.

The display is 6.82-inch and houses an earpiece and the 8MP AI front camera. The back of the
phone features the 13MP AI dual rear camera with quad-flashlight and a fingerprint scanner.
The power and volume buttons are on the right side while on the left side is the tray for 2 sim
cards and a microSD. Last but not least are the microphone, micro-USB charging port, and headphone jack on the bottom part of the smartphone.

Here comes the juicy part, the Infinix HOT 10 PLAY is powered by a MediaTek Helio G35 Gaming processor. It has an octa-core chip that delivers speeds up to 2.3GHz for a better,
faster, smoother entertainment and audio/visual experience.

It has 4GB RAM with 64GB of internal storage. Equipped with a 6000mAh battery, its Power
Marathon Tech lasts for 5 days, and even with power down to only 5%, turning on the Ultra
Power Mode gives an additional 19 hours of battery life.

When I first picked up the phone from the box, I expected it to be heavier since it’s a gaming phone — but I was wrong. The phone was surprisingly lighter than expected, with a comfortable button reach. Even the fingerprint scanner is reachable enough for me to easily press it and the look of the phone is ideal for one of the New Generation like me.

In the box are two screen protectors, a silicon phone case that helps keep the phone from slipping, a sim ejector pin, the 10W battery charger, a micro-USB cable, and a dollar bill that invites you to the XClub, an online forum for Infinix fans.

The rear camera is good enough to use for photoshoots. The images it captures came out vibrant and well-balanced between the soft and sharp tones. Unfortunately, the front camera is a bit soft-toned with images coming out less sharp and with less contrast.

Since the Infinix HOT 10 PLAY is considered a gaming phone, I tested 3 mobile games with notifications on. Now, everyone knows that notifications are quite annoying every time one pops up on the screen during gameplay as it results in lags, and blocks off the top view of the screen. In the HOT 10 PLAY, the notification slides through the screen from right to left without a white background so you can still see the screen while you’re playing.

In Call of Duty: Mobile the notification does not slide across the screen but only gives off a notification sound. The same goes for Genshin Impact. Note that even after downloading three mobile games, memory usage was only 1.89GB out of 4GB for RAM and 26.10GB out of 64.00GB for the internal shared storage. This indicates how your gaming experience will be as smooth as butter.

Now let’s talk about graphics. In Mobile Legends: Bang Bang the graphic setting was automatically on high and there was no lag at all. I tried changing it on the highest setting for more high-definition visuals, but the phone can only register the high setting.

For Call of Duty: Mobile the default graphics setting was on medium, which was still good for me. I was also able to change it to the high setting. However, Genshin Impact is only at the
low setting. I tried changing it to the medium and high but the game warned me that the experience would be laggy and the game could crash. I was still able to play the game smoothly, but it also tended to lag when battling some dragons and monsters.

The screen of the phone is wide enough to enjoy watching movies on Netflix and gameplays on YouTube. Somehow it was stupendous because I could see everything perfectly — the map of the games, the colors of the graphics and videos, and the high definition quality of the movies that I watched. It was like a visual playground inside the smartphone.

The placement of the speaker was quite smart because instead of the back of the phone it was actually on the top front of the phone. I didn’t need to worry about covering the speakers while playing. The sounds it produced were quite loud and I liked how you can hear everything. Audio was crystal clear and resonated while I played games, music, and watched movies from the phone.

As for the battery, I played games for an entire day and the phone was able to keep up with me. Even at only 10% power, I was still able to squeeze in a couple of hours of Mobile Legends: Bang Bang. Here’s the most thrilling part: even during heavy gameplay, this phone doesn’t get scorching hot. It did warm up when I playing for a while, but never to uncomfortable levels.

I also tried putting it on standby, used it for online school work, played music, watched videos, and spent a lot of time scrolling through my social media feed. After all those activities, guess what, the battery is still half-full, and good for another whole day.

Available on the Lazada app, the Infinix HOT 10 PLAY with MediaTek Helio G35 is priced at only PHP4,990 — really great value for something that’s good enough to satisfy your needs and keep you entertained every day.

A visual playground and practical phone for anyone.

C The Best Of You with CAMON 17