Gaming: Lovers in a Dangerous Spacetime

Gaming is usually seen as a solo experience. It conjures images of the recluse, with the lights down, cheese powder all over, and a bottle of neon green soda at the ready. That’s totally still a thing, but there’s also a more mainstream kind of gaming. Think a party, but instead of people crowding around boardgames, it’s a bunch of friends on the couch, sharing a game on the TV. This is the heart of the experience of Lovers in a Dangerous Spacetime.

The title has been around for a while on Windows devices and a few other consoles, but it’s on the Switch that it seems most natural. The game is a frantic co-op that has you and up to three other friends taking control of a ship, and navigating through a map, to find the exit. It’s very simple on paper, but extremely different in practice.

If you’re familiar with the old game Faster Than Light, this is very similar, though with a much more light-hearted feel. In the distant future, the world has been united by the ability to harness a virtually unlimited source of power—the power of love. However, one day, the reactor that processes Love blows up, releasing large amounts of anti-love, summoning a bunch of evil enemies to ruin your campfire-singing, group-hugging, high-fiving existence. It’s up to you and your crew of space explorers to scour the cosmos, find the source of the anti-love, and put an end to all the problems in the cosmos.

The story is ridiculous, to say the least, but that’s more than made up for how charming everything is. It has a candy-coated, saccharine-sweet, bright-colored aesthetic to it. Everything about it is cute, even the enemies. You’re going to get more than a chuckle just watching the intro, and that feeling carries over to the actual gameplay, as long as you aren’t frantically trying to keep your ship from exploding.

As we mentioned earlier, it’s a frantic game. Think Overcooked, and you’re in the right ballpark. Each player takes control of one spacefarer inside your orb-shaped space ship. The ship in turn has different stations, with each one allowing the player at the station to control an important function. There are stations to control one each of the four turrets, an engine room for steering, a map station for navigation, a shield room that lets you control a movable shield to protect an area, and a superweapon that can be triggered when the need arises.

Since the stations are physically apart from each other, this means each player has to walk over to the station they want to use, adding another level of confusion to the action. To help your team along, upgrades slots can be unlocked by rescuing space bunnies (it’s as absurd as it sounds). These same space bunnies are also the keys you need to escape each level, so upgrading happens pretty organically anyway.

Upgrades come in the form of gems that can then be slotted into the different stations in varying combinations, resulting in additional effects. For example, a metal gem on the engine station results in the thruster releasing caltrops that damage enemies on contact. The same metal gem, when placed instead in the turret station, will change that turret into something like flail that can be swung at enemies for more damage. The gems aren’t specific to particular stations, and produce interesting effects, particularly when combined. A power gem and metal gem might have an effect that better suits your playstyle than a plain power gem, for example. Part of the fun is in the combining gems, and finding out what’s best for you.

The frantic combat is also a big source of fun. When you’re surrounded by enemies, needing to fly out, and don’t know where to go, people screaming over each other, barking orders until such time as things fall into place is actually a lot more fun when the world you’re in is super cute. The game is very forgiving, and enough fun that if you fail a mission, it’s not such a big deal to pick it up and go again. 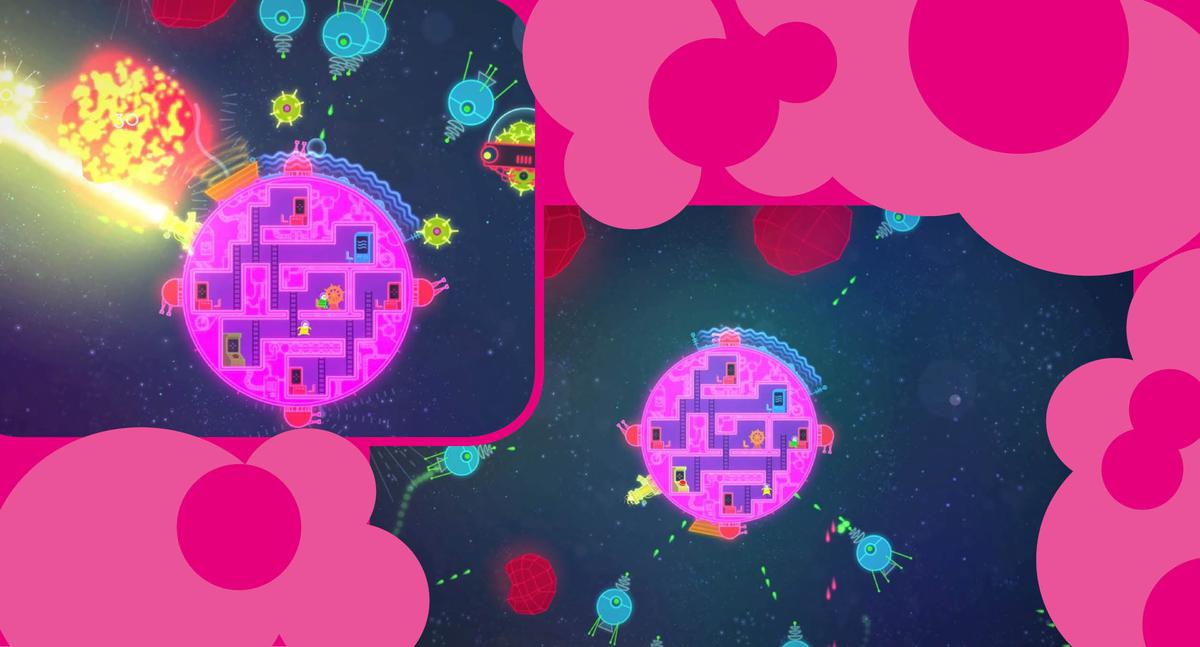 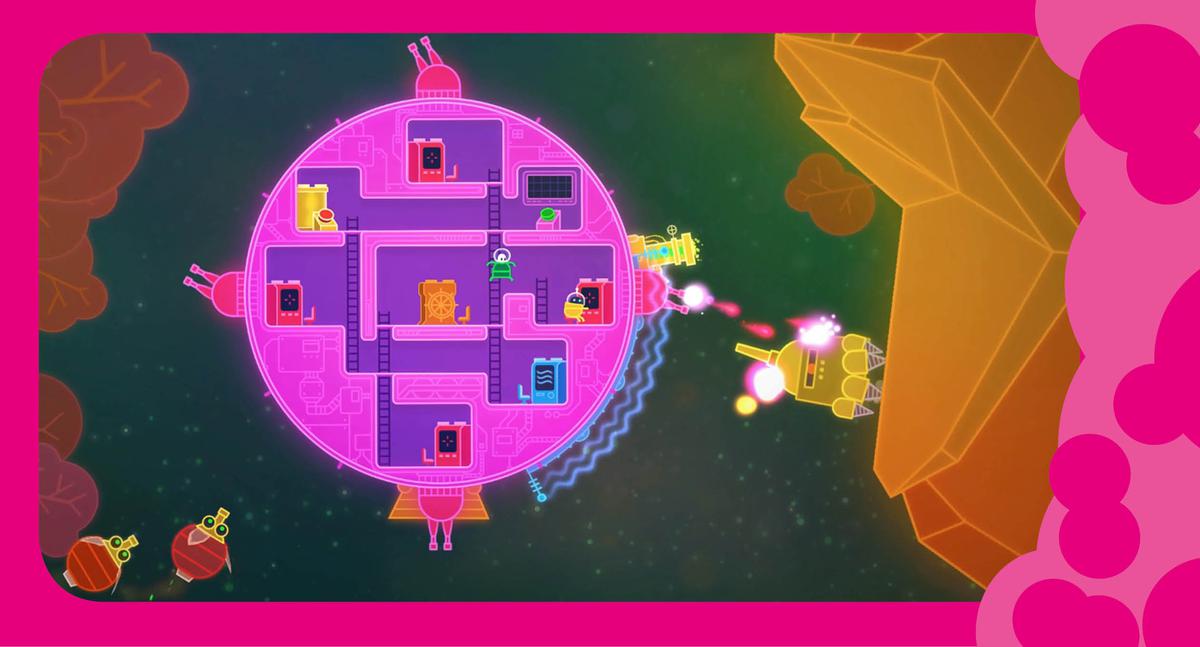 Enemies come in all shapes, sizes and abilities. From simple annoyances that can be swatted away with a casual turret shot, all the way to enemies that dwarf the size of your own vessel, it’s a game that keeps you on your toes. It’s simple enough to pick up, but demands that you work together as a team should you want any chance of getting through each procedurally generated map alive. It’s plenty of fun for any number of players, though it seemed like our playthroughs didn’t see any increase in difficulty when we moved from two to four players, making four-player runs surprisingly easy.

The reason we chose to review this years-old game is that it seems to be a perfect fit for the Nintendo Switch. It’s nice and casual, easy to just pick up anywhere and put back down again, and has a very gentle learning curve with gameplay that’s more rewarding than the simple premise or aesthetic let on. Even on the go, in the tiny Switch screen, it’s perfectly playable, as long as nobody hogs the screen. Should you find yourself lacking some nice co-op fun on your Switch, this is a really great game to get.

Developer and Publisher: Android Base