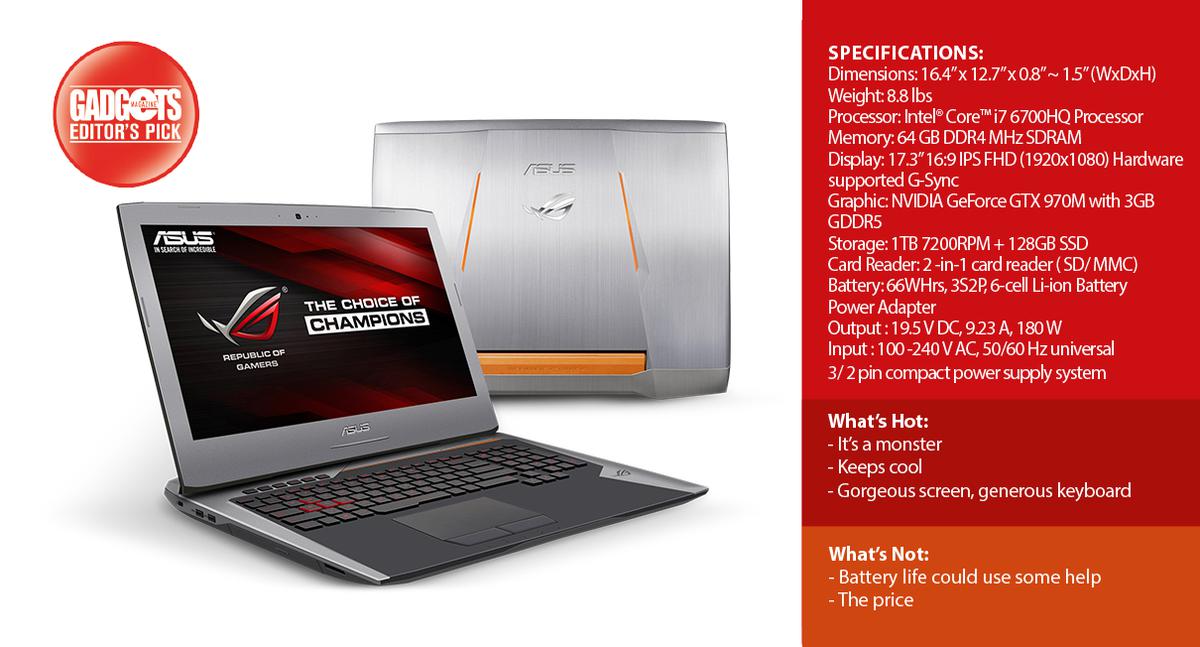 Gaming is serious business. Some of the PC ecosystem’s biggest, staunchest supporters are members of the gaming community, and for good reason. Fortunes are made and lost in the world of gaming, and if professional e-sports are any indication, it’s not going away any time soon. Asus is at the forefront of the gaming front, thanks to their ROG line of devices. We were lucky enough to get our hands on the ROG G752VT one of their most formidable gaming laptops. Does it live up to its beastly reputation? Read on.

Laptops and their different roles are easy to identify. Business laptops look like they belong in the boardroom, lifestyle laptops have vivid, playful colors, and the netbooks of old looked like toys. This ROG laptop leaves no doubt in your mind that it’s a gaming laptop. Brushed steel with black and copper accents, with sharp lines and angles all over make it look less like a productivity machine, and more like a really fast car. It’s definitely not for everyone, but it certainly knows its demographic.

After the initial shock at just how edgy the device is, the next thing you’ll notice is the size. It’s certainly a laptop, in that it’s not a desktop, but that’s about it. This thing is truly massive. I’m actually not sure I have tried using a larger laptop. It packs a massive 17.3 inch screen, with large bezels all around, and while that would normally be a negative, you’ll hardly notice the bezels given how gorgeous the display is. The main bonus of having such a large chassis, however, is an extremely roomy keyboard. The keys are very widely spaced, have tons of travel, and are backlit. There’s even more than enough room for a separate numpad and direction keys.There’s a large, roomy touchpad, with appropriately large buttons, that remain easy to reach from a neutral hand position. The wrist rest area is coated in a soft touch material, is plenty wide and comfortable for extended gaming sessions. Just don’t plan on carrying it around too much–it’s a hefty 9 lbs.

Where do we start? We could mention the 64 (yes, 64) GB of RAM. We could mention the 6th gen i7-6700HQ processor that has eight cores running at 2.6 and 2.59GHz. We could tell you about the 256 GB SSD and HDDs, or the GeForce GTX 970m. Wait we just did. As you can see, it’s an absolute monster. The keys on it are backlit a mean shade of red, with a spare row of keys for five programmable macros.

Ports abound on the machine. You have 4 USB ports, two on either side, a USB-C port, LAN, HDMI ports and three audio ports for connecting anywhere from headphones to whole audio systems, should the fancy strike. The screen is a full HD affair with hardware-supported G-sync, and it’s beautiful. Should you want to stream, or make a quick video call, it has a built-in webcam up top.Powering the whole rig is a 66WH battery that is just what a machine of this caliber needs.

To be honest, I was a little concerned going into this review. I wasn’t sure I could push it to its full potential, or even cause it to break a sweat. To be honest, with specs like this, it’s just not going to run into any problems, and it didn’t. Overwatch is massive right now, and while it doesn’t have very steep requirements, when everything is bumped to “Epic,” it’s actually quite a demanding title. At least if you aren’t running it on an ROG laptop. The G752VT wasn’t even breaking a sweat. With all setting absolutely maxed out, and some crazy action going on, PLUS the game recording software running in the background (it comes with XSplit for free), the frame rate was a smooth, and the cpu temperature was nice and cool for hours. Shadow of Mordor, a game that’s greedy for your system’s resources, was again no match for the laptop. Medium settings, more than adequate for a laptop, gave us framerates in the 80s, more than we can really appreciate. All that muscle, plus Asus’ vapor cooling technology, as well as dedicated cooling each for the CPU and GPU meant that it could keep going at that pace far longer than I could.

One of my problems with some of the gaming laptops I have dealt with is the uncomfortable heat at the wrists over time. The ROG has no such problem. The soft touch coating on the wrist rest also keeps your hands from sliding around, letting you keep consistent hand placement, and more consistent movement.

Cooling efficiency is something we’d like to go back to on the device. Even after hours of gaming, the huge fans, exhausts and the laptop’s overall large size keep uncomfortable heat at bay. There was no point during our testing that we had any temperature concerns.

It’s not without a few niggles though. Because of the size of the screen, and all that muscle, even the reasonably large battery can’t keep it running for all that long. On a full charge, just doing regular PC things such as browsing the web, playing a video, and other non-intensive functions, the battery meter reads a little over two hours on tap. If you’re going to be gaming with it, you’ll want to have an outlet handy. The edge of the wrist rest is also a little sharp, and starts to cut into your forearm after a while.

All told, the combination of hardware on this particular ROG laptop is great. The 970m, while not really the top spec mobile GPU, is more than adequate. 64GB of RAM seems a little over the top, but we won’t complain, and it has a lot of storage, which is a very welcome addition.

At PHP 99,999 it is a value proposition that isn’t for everyone. Those who know what this thing can do know that the price is more than worth it. Like we said at the start, gaming is serious business, and this is exactly the kind of serious laptop you need to get the job done.

If you know what you’re looking at, this is the laptop for you.